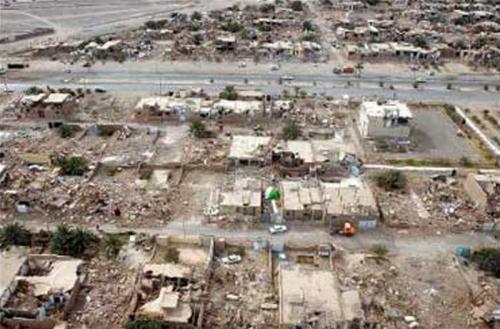 The 6.3 magnitude quake totally destroyed one village, a Red Crescent official told the Iranian Students’ News Agency (ISNA), but the nearby Bushehr nuclear plant was undamaged, according to Iranian officials and the Russian company that built it.

“Due to the intensity of this earthquake, this tragedy has deepened and we have seen the destruction of many homes in the region, the deaths of 37 people and more than 850 injured,” the governor of Bushehr province, Fereydoun Hassanvand, told Mehr news agency.

Many houses in rural parts of the province are made of mud bricks, which have been known to crumble easily in quake-prone Iran. Some 700 homes were destroyed, Hassanvand said.

Across the Gulf, offices in Qatar and Bahrain were evacuated after the quake, whose epicentre was 89 km (55 miles) southeast of the port of Bushehr, according to the U.S. Geological Survey. The early afternoon shock was also felt in financial hub Dubai.

The Russian company that built the nuclear power station, 18 km (11 miles) south of Bushehr, said the plant was unaffected.

“Personnel continue to work in the normal regime and radiation levels are fully within the norm,” Russian state news agency RIA quoted an official at Atomstroyexport as saying.

Iran informed the U.N.’s International Atomic Energy Agency that there was “no damage to the Bushehr Nuclear Power Plant and no radioactive release from the installation”, an agency statement said.

One Bushehr resident said the quake shook her home and the homes of her neighbours but they were not damaged.

“We could clearly feel the earthquake,” Nikoo, who asked to be identified only by her first name, said. “The windows and chandeliers all shook.”

While initial fears about nuclear fallout receded, nearer the epicentre the rescue efforts ramped up into the night in search of survivors and to feed and house hundreds of residents who were traumatised by at least 16 aftershocks.

A Red Crescent official told ISNA that 20 people had been saved by rescue teams searching through the rubble.

Reports in Iranian media spoke of landslides destroying buildings and crowds gathering in the town of Dashti from outlying areas in search of help. Military officials said army and police units had been deployed to maintain order.

Water and electricity lines were severed and communities stayed in the streets because of the threat from aftershocks.

Iran’s most powerful authority, Ayatollah Ali Khamenei, offered his condolences to the victims and urged authorities to extend all efforts to save lives and help the afflicted.

Tuesday’s quake was much smaller than the 9.0 magnitude one that hit Japan two years ago, triggering a tsunami that destroyed back-up generators and disabled the Fukushima nuclear plant’s cooling system. Three of the reactors melted down.

Iran is the only country operating a nuclear power plant that does not belong to the Convention on Nuclear Safety, negotiated after the 1986 nuclear disaster in Chernobyl which contaminated wide areas and made 160,000 Ukrainians homeless.

Western officials and the United Nations have urged Iran to join the safety forum.

Tehran has repeatedly rejected safety concerns about Bushehr – built in a highly seismic area – that began operations in September 2011 after decades of delays.

Iran sits on major fault lines and has suffered several devastating earthquakes in recent years, including a 6.6 magnitude quake in 2003 which flattened the south-eastern city of Bam and killed more than 25,000 people. In August more than 300 people were killed when two quakes struck the northwest.

A report published last week by U.S. think-tanks Carnegie Endowment and the Federation of American Scientists said that “ominously” the Bushehr reactor sits at the intersection of three tectonic plates.

“Iran’s sole nuclear power plant is not at risk of a tsunami similar in size to the one that knocked out the electricity and emergency cooling systems at Fukushima. But, repeated warnings about the threat of earthquakes for the Bushehr nuclear plant appear to have fallen on deaf ears,” the report said.

The quake happened on National Nuclear Technology Day when Iran’s leaders celebrate the technological advances they say will reduce the country’s reliance on fossil fuels, leaving more of its abundant oil for export.

Israel, Gulf Arab states and many Western countries fear Tehran is seeking a nuclear weapons capability and the Islamic Republic is under international sanctions aimed at forcing it to curb some of its atomic work.

Iran denies it wants nuclear arms and says its atomic work is for electricity generation and other peaceful uses.

Admiral Samuel Locklear, the commander of U.S. forces in the Pacific region, said the U.S. military believed North Korea had moved an unspecified number of Musudan missiles to its east coast.

An Obama administration official, speaking on condition of anonymity, told Reuters “our working assumption is that there are two missiles that they may be prepared to launch”. That was in line with South Korean media reports.

The North has been threatening the United States and its “puppet” South Korea on an almost daily basis in recent weeks, although the threats appear to be aimed partly at boosting internal support for young leader Kim Jong-un.

The Combined Forces Command in Seoul raised its “Watchcon 3” status, a normal defense condition, by one level in order to step up monitoring and increase the number of intelligence staff, a senior military official told Yonhap on Wednesday.

“There are clear signs that the North could simultaneously fire off Musudan, Scud and Nodong missiles,” Yonhap quoted an unidentified official as saying.

Pyongyang has frequently tested short-range Scud missiles but the longer-range Musudan and Nodong missiles are an unknown quantity. The Musudan missiles are reckoned to have a range of roughly 3,000-3,500 km (1,865-2,175 miles).

The North has said it would target American bases in the Pacific, although it is not known whether the untested missiles have the range to strike those bases.

Pyongyang has turned up its shrill rhetoric in recent weeks after the United Nations Security Council imposed sanctions for the state’s third nuclear weapons test in February.

It has threatened a nuclear strike on the United States – something it does not have the capacity to carry out – and “war” with South Korea.

On Tuesday, it told foreigners in