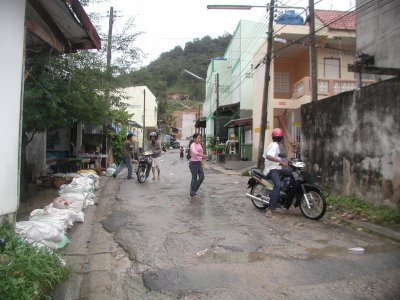 PHUKET: The skirts of Tropical Storm Vicente trailed good news and bad across Phuket over the weekend, topping up the Bang Wad Reservoir with badly needed supplies of water but, at the same time, sending mud pouring into seven homes in Phuket City.

The heavy rain added 288,000 cubic meters of water to Phuket’s only major reservoir, enough to keep the island supplied until October 20.

Isara Anukul, Chief of the Water Allocation Division of the Phuket Irrigation Office, told the Gazette today that, before the storm, he calculated that the reservoir contained enough water to last only until September 26, but that the heavy rain had brought a reprieve.

Meanwhile, Boonchai Somjai, head of the Phuket Provincial Office of Disaster Prevention and Mitigation, told the Gazette that the area most severely affected by the rain was in Soi Siang Tai, off Thepkrasattri Rd in Phuket City.

Seven homes just below the site of a property project were affected. The project site had just been cleared to allow construction.

“A lot of mud and water went through seven houses below. I contacted the homes’ owners and we have already cleared up the mud,” he added.

The Southern Meteorological Center (West Coast) reported today that Vicente had crossed into Laos and had been downgraded from tropical storm to tropical depression.

The weather system is moving in a northwesterly direction at about 18kmh, heading for northern Thailand.

In addition, Phuket is experiencing a “rather strong” southwest monsoon currently over the Andaman Sea and the southwestern coast of Thailand. Shipping should proceed with caution and small boats should remain ashore, the meteorological center advised.