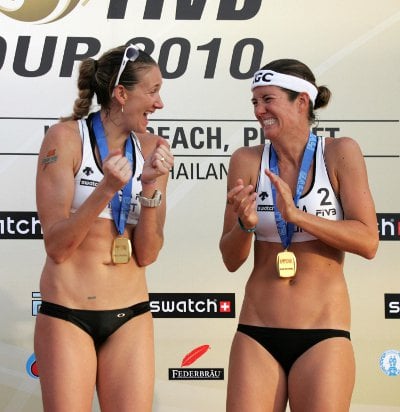 Along with partner Nicole Branagh, the US side defeated surprise opponents Marta Menegatti and Valeria Rosso of Italy, 21-23, 21-14, 15-11. Carolina and Maria Clara Salgado of Brazil won the bronze medal by defeating Sanne Keizer and Marlene Van Iersel of Holland, 21-17, 21-14.

The title gives Walsh sole possession of the lead in overall tour wins. She had been tied at 38 with former partner Misty May-Treanor, since the end of 2008.

This week Walsh partnered with Branagh for the third time. Two of their events have produced wins, having also won in Dubai in 2008. She missed the entire 2009 season and all but two events this year while giving birth to two boys in May 2009 and 2010.

“It feels like a new world to me because all that I have accomplished is so far behind me,” Walsh said. “This win is so special to me; it’s my first win as a mother of two. I would feel better about it if I had played better in the last match. I’m bummed I let the nerves get to me. I’ve played some big matches in big settings, but today I was nervous,” she admitted.

The fourth-seeded Americans became just the fourth women’s team to win a SWATCH FIVB World Tour gold medal after winning five elimination matches. They had lost in the second round to Elsa Baquerizo and Liliana Fernandez Steiner of Spain, but then swept six straight opponents before the title match.

Surprise finalists Menegatti and Rosso, the first Italian team to ever compete in a gold medal match, seemed to have the crowd on their side.

The 16th-seeded duo became partners during the week preceding last week’s tournament in Sanya, China, due to an injury to Menegatti’s regular partner, Greta Cicolari.

“We really came here to win gold; it was not enough to just be here,” Rosso said. “We made it this far due to our service game, but today we weren’t serving very well. I feel like we both grew up a lot here.”

The Brazilian Salgado sisters defeated the top-seeded team in Phuket and suffered just one loss in the tournament, but the semifinal defeat at the hands of the Italians prevented them from playing for the gold medal. Instead, the eighth-seeded team finished the season with a bronze medal. The Salgados defeated Sanne Keizer and Marleen Van Iersel of the Netherlands 21-17, 21-14 to win their third bronze of the year and ninth career medal.

“I would have liked it to end a little better, but it’s nice to get a bronze,” said Maria Clara. “It’s a big step for us to finish the way we did the last two events (placed fourth in Sanya). We were tired. We have domestic events every other week in Brazil and we have to go right back for the next one. The high finish means we shouldn’t have to play in the country quota next season.”

In the five-year history of events in Phuket, the Americans have won the last four, with Walsh also winning in 2007 with May-Treanor and Jen Kessy and April Ross claiming the titles in 2008 and 2009.