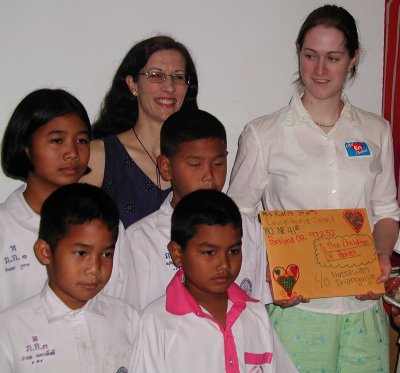 PHUKET CITY: A 61-strong group of Americans met Phuket City Mayor Somjai Suwannasuppana this morning to deliver a message of hope and friendship, along with US$1,200 (48,000 baht) for grants for students affect by the tsunami.

The Americans, 42 of whom are from the state of Oregon, are members of the “Flight of Friendship” organisation, which has been set up to help Thailand, and Phuket in particular, by promoting tourism and supporting education here.

The group arrived in Phuket after spending one day in Bangkok, where they met representatives of the Ministry of Foreign Affairs and the Ministry of Tourism and Sports to discuss ways of promoting tourism.

After Phuket, the group was due to spend a day in Krabi before returning first to Bangkok and then to the United States.

“The objective is to show that Phuket is open and ready for business,” said Nicholas Stanley, Thailand’s Honorary Consul General in Oregon.

Sho Dozono, the President and CEO of Azumano Travel, said he was moved by the “fantastic and wonderful” welcome the group had received at Phuket International Airport.

He said, “We have many Thais living in Oregon and there is a relationship between our governments, but most of all we wanted to show we care….

“For us, it was important to come from the United States to Thailand and especially Phuket and other cities, where the extent of the damage was misrepresented.

“I am in the tour business so I wanted everyone to understand that Phuket and all of this area is still open for business. I am unhappy with the media that has painted this horrible picture that is keeping tourists away.”

The group also brought US$267 (10,680 baht) donated by primary school pupils in Oregon, as well as gifts and letters from them for children of a similar age in Phuket.

The youngest member of the group was 17-year-old Elaine Daggett, of Hood River Valley High School. She told the Gazette, “I haven’t visited all the beaches yet, but I am going to remember how exciting it has been here. I will surely tell all my friends that this is a wonderful place to visit.

“They will be very happy that we traveled here to give the gifts to children who were affected by the tsunami.”

Flight of Friendship also hopes to raise 300,000 baht to buy a water filter for an area where the water is still not safe to drink, either in Kamala or Patong, as well as other items needed in affected communities.