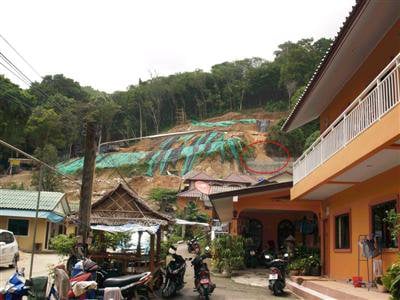 PHUKET: Two men are dead and a third injured following a mudslide at a hillside construction project during heavy rains in Patong yesterday afternoon.

The slide hit at around 1:30pm as workers used a backhoe and other heavy equipment to excavate terraces in a hillside plot of a resort project on Soi Sang Krasee off Nanai Road in Patong.

Construction workers were able to pull 45-year-old project foreman Thawisak Nukaeo alive from the mud, but he later died at Patong Hospital.

It took the workers about 20 minutes to find and unearth the body of a 35-year-old Burmese laborer identified only as “Neung” from the spot where he was buried alive.

In a bitter irony, the mudslide was apparently triggered by the workers’ efforts to construct a retaining wall at the site.

Patong Mayor Pian Keesin has ordered a temporary work stoppage at the site to check the project’s environmental impact assessment report to ensure that the construction was properly permitted and proceeding according to regulations.

The landslide came just days after the Phuket office of the Department of Disaster Prevention and Mitigation announced it would hold emergency landslide preparedness training for police, medical staff and emergency rescue workers in Patong on June 28 and 29.

A recent island-wide study conducted by the Mineral Resources Department found that many parts of Patong are at high risk of landslides due to all the hillside construction taking place there.

The heavy rains have also caused severe flooding in many parts of Patong, including in the area now referred to by many as “Nanai River” and other chronic problem spots, such as along Sirirat Road.

The low-lying stretch of the hilly Phra Barami Road where a sinkhole formed last year remains intact, but floodwaters, as deep as half a meter, are now flowing over the road during the heaviest rains, creating traffic jams and treacherous conditions for motorists, particularly those on motorbikes.

The rain has stopped in Patong this morning, but the 24-hour-forecast by the Meteorological Department calls for “almost widespread” thundershowers covering 80% of Phuket, with isolated heavy to very heavy rain.