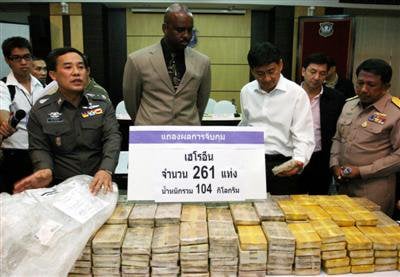 Carrying a search warrant, the police arrested the pair without incident and seized 261 bricks of the drug on Sunday from house number 74/267 in the housing estate in Tambon Rasada.

Also seized as evidence in the case were three suitcases used to carry the drugs, three mobile phones, and 25 keys.

The arrest followed a tip-off early in August by the US Drug Enforcement Administration (DEA) to Thai police that members of a dealing gang known as the “Southern Dragons”, led by Taiwanese national Lan An Lung, would bring heroin from the Golden Triangle through Thailand for distribution to Taiwan, Hong Kong, China and other countries in the region.

The gang was the largest known Taiwanese heroin smuggling ring operating in the Far East, the DEA told their Thai counterparts.

Representing the DEA at the press conference was one of its officers, Andre W. Kellum.

Lt Gen Wutti said arrest warrants have already been issued for five more gang members: Thais Sarayuth Ketsariniras, Sathit Paiboon-Issarakul, Manas Chaidee, Sumit Thanapiromkul and Thaiwanese national Chern Wan Ke. A warrant for the arrest of another Taiwanese, An Lung, alleged to be the leader of the smuggling ring, has also been requested.

The two suspects had hidden the drugs in a double-lined concrete structure beneath the home’s concrete kitchen floor. The high-tech hiding place included a hydraulic lift device that would mechanically lift the stash from its hiding place at the push of a button.

The gang used the home to store bricks of heroin until they could be hidden away in gas cylinders. These were then placed on small fishing boats that made their way to sea. These, in turn, were met by larger vessels that would trans-ship the contraband to ports abroad.

The bust comes in the second week of the government’s latest “war on drugs,” a 90-day crackdown that authorities say will run through the end of January 2009.