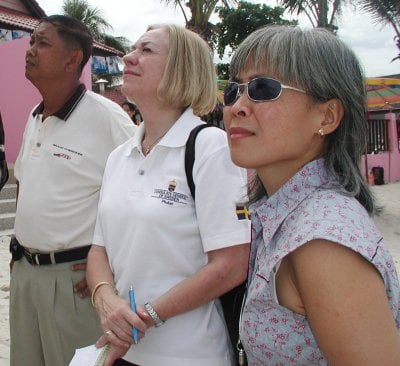 PHUKET: One of Patong’s three tsunami warning towers was tested this morning, its siren being triggered remotely from the National Disaster Warning Center (NDWC) in Nonthaburi, near Bangkok.

Adm Thaweesak Daengchai, Adviser to the NDWC, told the Gazette he was pleased with the test and with the fact that, this time, most people seemed to know that it was a drill only, and not the real thing.

“Patong Municipality did a good job of letting people know about the test,” he said.

In the case of a genuine tsunami warning, he said, all three towers in Patong would be triggered. “In addition to the sirens, we will be able to broadcast warnings on TV and radio – which is important, particularly for boats at sea – and the Governor of Phuket and local authorities will also receive warnings by SMS and fax,” he explained.

“Eighteen towers in Phuket and a further 62 in the other five Andaman provinces must be complete by December 26. There will be more testing of the system in all six provinces in mid-December.”

Christina Palm, the Phuket-based Swedish Consul, who was invited to observe the test, said, “I’m very happy to see that something has been done. This looks as though it will be a fantastic alarm system when it’s ready – of course, it is in the planning stage at the moment.

“I get letters and visits from tourists who ask, ‘Will it be safe in Thailand if there is another tsunami?’ or ‘How will we be warned?’. So now I can tell them about the system and how it works. It’s good for Thailand and tourism.”

Frenchman kills self “over debts’