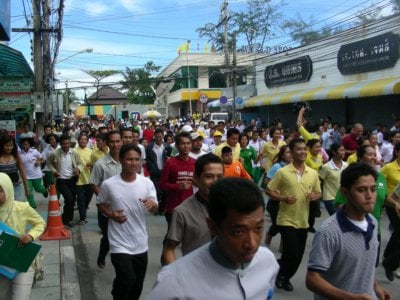 PHUKET: Andaman Wave 007, the first regional testing of the 79 National Disaster Warning Center (NDWC) tsunami warning towers along the Andaman Coast, was conducted at 9:45 this morning, with mixed results in Phuket.

While impressive mock evacuation and emergency response drills were being staged for the media on the beach at the foot of Soi Bangla in Patong, residents in other parts of the island complained that the sirens and recorded voice warnings were too quiet, with one siren not making any noise at all.

The evacuation at Soi Bangla was reminiscent of the April 2005 evacuation, with helicopters staging offshore maneuvers, rescue workers assisting the elderly, and volunteers pretending to have various handicaps and injuries.

In Kalim, less than two kilometers to the north, the only signs of activity were at Baan Kalim School, where 300 students ran to the third floor of the school from the courtyard in under a minute. Other residents in the area disregarded the siren.

Along most of Patong Beach and Kalim, people said they could hear the siren but could not make out voice-recorded warnings aired in different languages.

People more than a few hundred meters back from the beach said they heard nothing at all, as the sounds were completely drowned out by the noise of passing traffic, strong offshore winds and construction projects.

A group of lifeguards stationed at the beach in front of the Phuket Graceland Resort & Spa said they had heard no warning sounds.

“One thing is certain: if the siren sounds at night there is no way anyone will be able to hear it along Soi Bangla,” said a woman selling tours from a roadside kiosk.

Speaking from NDWC headquarters in Nonthaburi, NDWC Director Dr Smith Dharmasaroja said he was satisfied with the performance of the 79 towers, but was displeased by the failure of local authorities in many areas to carry out evacuation drills.

Told that the warning tower at Baan Ao Yon on Phuket’s east coast had failed to sound, Dr Smith said that it was among 20 towers in the region that were installed by local authorities, not the NDWC.

At Baan Ao Por, about 50 local people took part in evacuation drills, while even fewer took part in Chalong and Kamala.

Chalong resident Jeffrey Powell, 67, a native of the English Midlands, joked, “It could be someone’s kettle boiling over.” He sat in a roadside cafe about 200 meters from the pier, where offshore island speedboat shuttles dock.

“In Patong, they have a proper siren. It’s loud,” he added.

Mr Powell said that many marine vessels have horns that emit similar sounds to the warning siren.

“I know one thing,” said cafe owner Yui Jandarot, 46, whose shop was damaged in the tsunami two years ago. “No one has time to listen to announcements when the wave comes. It comes quickly.

“My children were playing in the sea in front of our shop when the tsunami came. The first wave drove all the boats southeast towards Palai Beach. The second wave was larger and the water came inside the shop, but they still played in the water even with all the junk floating around,” she added.

“They’d have continued playing, too, but their father worried something weird was going on and took them away.”