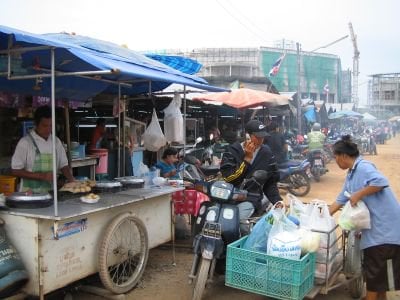 PATONG: Mayor Pian Keesin on Friday morning led a squad of Kathu police and more than 30 municipal officers to the Ko Kaew Market, where he ordered the police to detain Ruantong “Da” Wareesri, who is leading the vendors’ fight to keep the market open.

K. Da, a committee member of the 240-strong Ko Kaew Market Association, organized a meeting with the Senate Committee on Tourism in Bangkok last month, during which she pleaded for fairness in the matter.

At the meeting, which was attended by both K. Pian and Phuket Province Chief Administrative Officer (Palad) Vichan Busapavanich, it was agreed that the market vendors would begin selling their wares at the new Mae Ubon Market on Nanai Rd on alternate days, once Mae Ubon Market provided them with sufficient canvas roofing and parking spaces.

The Municipality has pressed the vendors to relocate since the opening of the new Mae Ubon Market last year. The vendors say it is at least the third time they have been forced to move, and that business has never been as good as it was back in 1992, when they were allowed to sell their goods along the beachfront in Patong.

The market owner also decided not to renew the market’s license when it expired last year, so it is now operating illegally.

The vendors taped Mayor Pian on video this morning saying, “We want all the vendors to move out [now] and we don’t care where they [go to] to make a living. We already have [set up] canvas roofs and car parking for them [at the new Mae Ubon Market], even if it isn’t enough for everyone,” he said.

“Police will set up a barrier tomorrow blocking the entry [to Ko Kaew market] and we will arrest any vendors who [try to] enter,” said the Mayor.

He also denied having anything to do with a fire at the market on the evening of November 26, in which, the vendors say, eight stalls were burned. The Vendors’ Association estimated the damage at more than 50,000 baht.

The following day, according to the vendors, persons unknown blocked a nearby canal, diverting it course so that that much of the market ended up knee-deep in muddy water. Graffitti have also appeared, delivering warning of a bomb if vendors continue to operate there, they claim.

This morning, while she was being detained in a CSD vehicle, K. Da told the Gazette by mobile phone that she was being held by police at K. Pian’s request. With their leader out of the way, Mayor Pian then went to talk to the other market vendors, she said.

“If K. Pian tells the police to arrest me they will; if he says let me go, they will,” she said while in detention.

K. Da was later released, after K. Pian finished talking to the other vendors.

Another Vendors’ Committee member, Thongchai Sae-ong, told the Gazette today that several vendors had tried to make a go of it at the Mae Ubon Market, only to find their sales volume fell. They later returned to Ko Kaew market out of economic necessity, he said.

Mae Ubon Market is too far away to attract many customers, he explained.

He added that his older brother Natcha, an electrician at the market, had been shot last month in another act of intimidation.

K. Thongchai said attempts to get assistance from Phuket Governor Udomsak Usawarangkura had failed, as the Governor appears to support Mayor Pian on the issue.

The Vendors’ Association plans to make an appeal to Prime Minister Thaksin Shinawatra as soon as possible, he said.

Gov to push for expo center in Ao Phuket