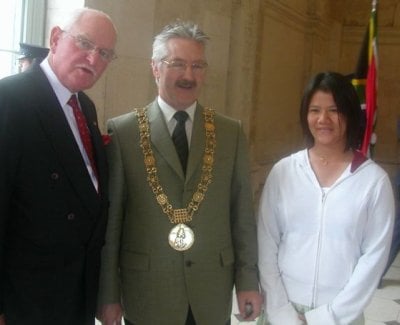 DUBLIN, IRELAND: A Phuket student and her mother were among the 250 international guests at the City Hall here on June 15, when the 2005 International IMPAC Dublin Literary Award was presented to American Edward P Jones for his novel, The Known World.

The annual IMPAC Award is, at 100,000 Euros (about 5 million Baht), the richest prize in the world for a single work of fiction published in English.

The Phuket student, Thipratri “Kae” Saenkam, a 17-year-old secretarial student at Phuket Vocational College, was one of two winners of an earlier, related competition, the Junior IMPAC Dublin Literary Award for Thailand.

As part of her prize, she and her mother, Somchuan Saenkam, a caddy at Phuket Country Club, traveled to Dublin to attend the presentation dinner.

The Junior IMPAC Dublin Literary Award, comprising an English-language essay competition, is held in the United States, South America, Thailand, Malaysia and Finland, with plans to expand it to other countries.

This year, there were two winners from Thailand – both of them from Phuket.

Ella Micheler, 16, a student at Dulwich International College, was unable to accept her prize of a trip for two to Dublin due to educational commitments. But for Kae and her mother it was the trip of a lifetime – their first time on an airplane, and their first time staying in a five-star hotel.

The two enjoyed a tour of Dublin and a visit to the Guinness brewery. “The trip was very interesting,” Kae said. “Dublin City is beautiful and everyone has been very friendly.”

In his speech at the award presentation dinner – held at Mansion House, the official residence of Dublin’s Lord Mayor – the Chairman of IMPAC, Dr James Irwin, highlighted the plight of more than 200 writers worldwide who sit in prison for writing about corrupt governments. Young writers must be encouraged to continue speaking out, he added.

Winner Edward Jones said, “It took me 11 years to write this, my first novel, and my greatest concern was that I would not find a publisher. Winning the International IMPAC Award was beyond my wildest dreams.”

Mr Jones missed his flight from the US, arrived late in Dublin, and did not have time to change his clothes. “My suit is rumpled,” he said, “and my shirt is crumpled, but my heart is soaring.”