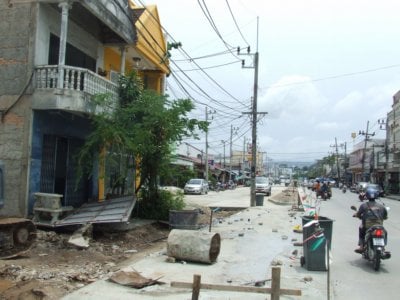 PHUKET: Two townhouses which have been at the center of a court battle for 20 years are finally being torn down to allow road expansion in Phuket City to go ahead.

The townhouses, located on a 500 meter stretch of Phunpol Road, have held up expansion of the road from two lanes to four.

A number of restaurants, houses and businesses that line the two-lane road have already been demolished to make way for the expansion.

However, when demolition teams reached the townhouses, they were told work would have to stop because the buildings were at the center of a legal dispute.

Legal wranglings over ownership rights began 20 years ago between one of the building owners, Prapas Sinsiri, his sister, and Swedish national Ole Pedersen.

Mr Prapas said that one of the two semi-detached townhouses was owned by his sister.

The building was then taken over by an unnamed bank, which sold it to a local lawyer.

“The second townhouse was mine, but the court favored Mr Pedersen,” said Mr Prapas.

Mr Prapas said the lawyer then bought the second property from Mr Pedersen for 2.8 million baht and sold the entire building to Muang Municipality for 4.1 million baht.

Following the sale of the building demolition teams were immediately told to continue their work.

The buildings are now being torn down.