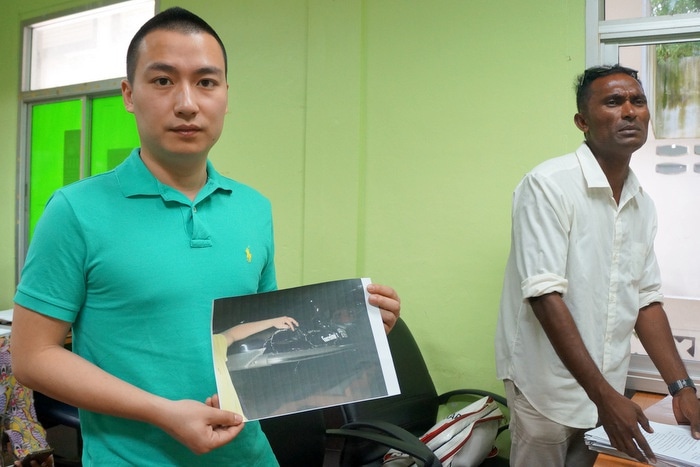 “Two of the jet-skis collided, after their riders were driving too close to each other. At first, drivers were asked by the rental operator to pay 200,000 baht. However, after negotiations, the operator agreed to settle for 90,000* baht.”

Regardless of the tourists paying the settlement, Mr Anusorn led the pair to Cherng Talay Police Station, and then the Damrongtham Center (ombudsman’s office) in Phuket Town to file complaints.

All the parties were called to the Damrongtham Center to settle the dispute today, though Cheng Zhang, who admitted fault for the accident, left Phuket this afternoon.

“The four jet-skis involved are registered, but their insurance expired last month. The owner is in the process of obtaining insurance for them now,” said Surachai Yomdee, current head of the Bang Tao Jet-ski Club.

“The owner agreed that the lack of insurance was his fault – by law all jet-skis must be insured – but he told the Chinese tourists not to drive too close to each other before they took the jet-skis out.”

Mr Surachai declined to name the rental operator who initially asked for 200,000 baht to pay for the repairs. The operator himself was present at the Damrongtham Center, but also declined to be publicly identified.

Mr Anusorn fired back that it was not the tourists fault that the jet-skis were uninsured.

“It was the owner’s fault. He has no right to claim money for repairs from tourists. They should get all their money back,” he said.

A new settlement was reached today with the jet-ski operator returning 40,000 baht to one of Mr Cheng’s friends who was acting on his behalf at about 3:30pm.

The complaint filed at Cherng Talay Police Station was to be withdrawn as part of the settlement, Mr Surachai confirmed.

Governor Nisit Jansomwong was present at the Damrongtham Center to hear the jet-ski operators haggle for their discounted claim.

Mr Surachai urged Governor Nisit to ensure that no more unregistered jet-skis were allowed to be rented out in Phuket, echoing his call last month for all jet-skis to be registered (story here).

Gov Nisit obliged, and called Mr Phuripat while still in front of Mr Surachai to remind the chief that no more than the current 286 jet-skis are allowed to be operated in Phuket.

In 2012, Mr Ma-ann called in competing jet-ski rental operators at Bang Tao for talks after rumors were spread that guns were being readied to settle a dispute over illegal jet-skis being rented out to tourists at that beach (story here).

* CORRECTION: The original report stated that the amount paid was 80,000 baht.