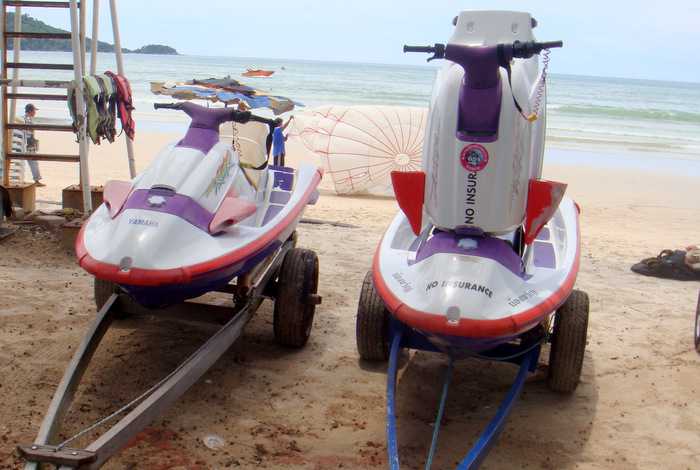 PHUKET: A tourist was run over by a vehicle towing a jet-ski trailer on a Phuket beach on Tuesday, prompting a jet-ski management and safety meeting this afternoon.

The Phuket Gazette was notified of the incident by a foreign man, who asked not to be named, who witnessed the incident on Kata Beach.

“A woman was run over by a black jeep towing a jet-ski trailer while on her mat in the shade up by the sea wall on Kata Beach,” he said.

“The vessel had been unloaded in the water line 60 meters from the wall. [There was] no reason for the jeep to be up that high as there was plenty of room to turn 360 degrees without any maneuvering to return to the ramp.”

The woman suffered only minors bruises on her leg, said Jirawut Veerakarn, president of the Kata-Karon Jet-Ski Club.

“Luckily, she was not seriously injured in the incident,” he told the Gazette.

Mr Jirwaut explained the accident after questioning jet-ski operators who were present at the time.

“I was told that the woman was lying on her mat on the beach when a jet-ski boy, who was driving recklessly, ran the vehicle over her. She became trapped underneath, but was able to crawl out,” he said.

“The operator took her immediately to Bangkok Hospital Phuket for treatment.”

The woman was discharged shortly thereafter and returned to the beach the following day, Mr Jirawut added.

In defense of the effort to cover up the incident by not reporting it to the police, he was dismissive, simply noting that the woman was “not seriously injured”.

Nevertheless, policies regarding the unloading of jet-skis on the beach have been altered, and a jet-ski zone will be implemented and roped off.

“There will be only one area on the beach where jet-skis can be unloaded. No other vehicles will be allowed to drive on the beach, except along the designated path to the jet-ski drop-off area,” Mr Jirawut explained.

“We will also install ropes and buoys around the zone so that it is clear where tourists can come to rent a jet-ski, and which area to avoid for those who do not wish to rent one.

“I will also tell operators to take care when transporting the jet-skis. They must drive slowly and have at least one person watching out for people on the beach.”

Officials from Karon Municipality met this afternoon with police officers and other relevant officials to discuss the future of jet-skis on the beach and safety for the incoming high season.

“The high season is coming, and so are more tourists. We want to make sure that Kata-Karon beaches are safe and fun,” said Mr Jirawut, disingenuously.

Karon Municipality Chief Administration Officer (Palad) Weerasak Anekwongsawat had not yet been told about the accident, but vowed to look into the problem and to help support better beach security.

“The Marine Office is the one that deals with jet-skis in Phuket. However, I will also make sure that Karon Municipality looks into the issue,” he said.

“The high season is coming, and we must make sure that we have safe and clean beaches to welcome tourists from around the world,” he greased.

Man shot dead in front of his son in Phuket street