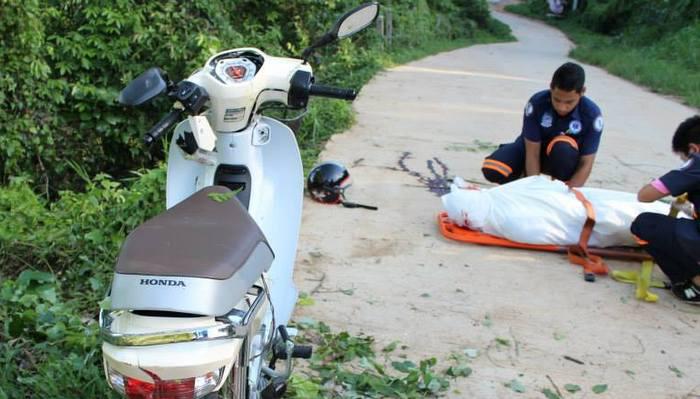 PHUKET: A holidaymaker died after careening off the road leading to Big Buddha Hill yesterday afternoon. He had gone to the iconic Phuket destination to make merit with his girlfriend.

Chaiya Teetuan, 37, died at the scene of the accident, at the curve near At Hill Adventure Tour Elephant Camp Phuket*, at about 4:30pm. He was wearing a helmet at the time of the accident.

His girlfriend, who asked police not to reveal her name, was seriously injured and broke her leg in the crash. She was taken to Vachira Phuket Hospital.

“Mr Chaiya, who was from Northern Thailand, was not familiar with the road. On his way back, he overshot the curve,” Capt Thada Sodarak of the Chalong Police told the Phuket Gazette.

“The motorbike ended up in the underbrush meters away from his body.”

“Please drive very carefully, especially on roads you are not familiar with. Steep, winding roads can be very dangerous,” the policeman added

* The original story stated that the accident was near Siam Safari Elephant Camp, which is about 800 meters from the curve. The error is regretted.

Regardless, Siam Safari Elephant Camp management wrote in a statement to the Gazette, “We send our condolences to the families of the people involved in this accident and hope that this unfortunate event brings more attention to the road conditions in Phuket.”