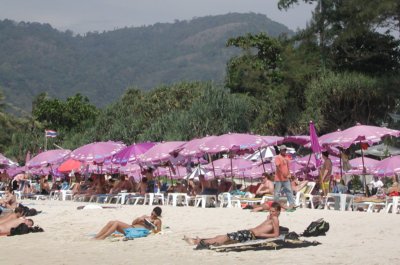 PHUKET: Tourism industry experts remain cautiously optimistic that the bombings in Bangkok will have limited impact on tourism numbers in Phuket.

Suwalai Pinpradab, Director of Tourism Authority of Thailand’s Southern Region 4 office in Phuket, said, “We are concerned about this in Phuket, especially as it comes during a peak period for tourism.

“If similar incidents occur and the violence continues to spread, we could face problems here.”

Foreign embassies, including those of Australia, New Zealand, England and the US, issued warnings advising their nationals to exercise caution while traveling in Bangkok, she said.

“However, I have yet to receive reports of tourists canceling plans to visit Phuket,” she said today.

“If this string of bombings turns out to be an isolated incident, I think tourism prospects for 2007 remain very good. I have spoken to several hotel operators and they have told me business is very good at the moment,” said K. Suwalai.

Phuket Tourist Association (PTA) President Maitree Narukatpichai told the Gazette that so far there has been no impact on bookings at the Hilton Phuket Arcadia Resort & Spa in Karon, where he is Owner’s Representative.

“I haven’t checked with other hotels yet, but nothing has changed at my hotel. However, this is bound to have some impact on the industry, as security is very important to tourists. Reports about the bombings in the international media will damage the entire country’s reputation, especially coming in the wake of a military coup,” he said.

Despite his concerns, K. Maitree expects 2007 tourist arrival figures to match the estimated 4.8 million visitors who came to Phuket in 2006, provided there are no more threats to security.