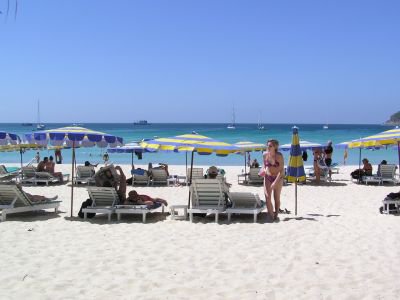 PHUKET: Tourist business figures and environmental activists are, remarkably, in agreement with an assessment by one of the world’s top travel magazines that Phuket is “getting ugly” as a tourist destination. The “ugly” assessment was published by National Geographic Traveler magazine after it conducted a survey, in collaboration with the National Geographic Sustainable Tourism Initiative, of 200 specialists in sustainable tourism, destination stewardship and related fields. The specialists assessed 115 well-known destinations worldwide. Phuket came third from last with a score of 43 out of 100, beating only north-coast Jamaica and Spain’s Costa del Sol. Phuket came well behind four other destinations in Southeast Asia: Indonesia’s Borobodur scored 61, Bali 58, Angkor 52 and Chiang Mai 51. Destinations were given scores for environmental and ecological quality; social and cultural integrity; condition of built heritage; aesthetic appeal; appropriateness of tourism development and outlook for sustainability. They were also scored from 1 to 10 for overall condition, ranging from 1 for “catastrophic” to 10 for “enhanced”. Panu Maswongsa, Vice-President of Marketing of the Phuket Tourism Association, told the Gazette that he agreed with the result of the survey. “We have to accept the reality. We should try to improve Phuket instead of making excuses. We know what is happening, so we should not lie to ourselves. We think too much about attracting tourists but never about protecting the environment or improving public utilities to support tourism. “Thailand makes about 50 billion baht a year from tourism but the government never does anything to improve basic public utilities.” Although he acknowledged that publication of the survey might affect Phuket’s tourism, he added, “It is good for us to know.” Thanu Nabnien, Coordinator of the Wildlife Fund, Phuket, told the Gazette that he too agreed with the assessment. “Problems always come together with tourism, especially environmental problems,” he said. “For a long time there has been a conflict in thinking between those who believe that Phuket should be a destination for high-class travelers and the Tourism Authority of Thailand [which aims simply to keep increasing tourist arrivals]. So there’s a conflict and we don’t know what exactly Phuket should be,” K. Thanu explained. “We keep hearing that there are measures to protect the environment, such as environmental legislation and zoning to control pollution, but there is never any enforcement. We have laws and rules but no action. We have talked a lot about zoning but it never gets applied,” K. Thanu added. He also complained about the lack of public involvement in planning. “When we have public hearings, we find that the government has already made its plans and the people are there only to listen.” John Gray, Managing Director of ecotourism company John Gray’s Sea Canoe, told the Gazette, “I think we need to slow down and remember what Phuket can be. I think we should listen to National Geographic Traveler because the quality of life is more important than money. “I think Phuket is going to find itself losing the top-quality people and we are going end up with the East Asian group tours. They don’t spend much money and they destroy nature. “I think this trend of thinking only of tourist arrivals is not a good one. We should be thinking about the quality of tourist, not about the numbers alone,” he added. “I think Phuket’s going downhill fast. I’ve been in Phuket 15 years and until about three years ago, when people complained about Phuket, I used to say, ‘You’re crazy, man. Phuket’s a beautiful place to be, it’s a lovely and wonderful place.’ But in the past three years we have just gotten too greedy.” The Director of the local TAT office, Suwalai Pinpradab, told the Gazette, “We have to accept that some people see us like this, so we have to improve our product and make an urgent effort to preserve the environment. Responding to criticism of the TAT’s drive to constantly increase tourist numbers, she said, “Definitely we need to increase the number of tourists – it means greater income for the country. But this doesn’t mean we are destroying tourism sites. It is the responsibility of business people and local government. Wherever I go, I always emphasize the need to preserve the environment. She noted that another major travel magazine, Conde Nast Traveler, has just published the results of its own reader survey to identify the world’s top 100 hotels. Two of these are in Phuket – the JW Marriott and the new Racha Resort.