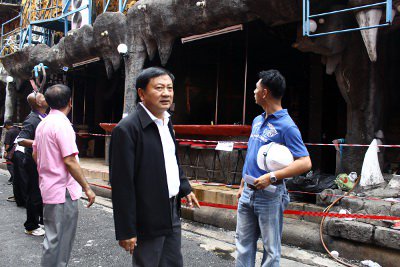 PHUKET: The chief inspector from a team of expert architects called in to investigate the Tiger Discotheque inferno yesterday said he believed that 20 per cent of the upper area inside the disco was “highly flammable”.

The same team of investigators yesterday said that the highly flammable polystyrene foam used in making the discotheque’s iconic decorations likely contributed to the deadly fire.

The upper area of the disco has come under the scrutiny of investigators as it remains unclear whether or not the “extension” to the original building plan was approved by the local authority, Patong Municipality.

“We will investigate to confirm whether or not the ‘extension’ was an approved addition to the structural plan. We will need to check the building’s historical documents and building permit,” Lt Col Bundit said.

“We will also investigate whether they [the nightclub operator] restricted the number of people entering the building in accordance with the building’s rated capacity. Although this is done in other countries, in Thailand we have yet to introduce regulations to ensure it becomes standard practice,” he said.

Lt Col Bundit told the governor that it was critical that local authorities conduct regular building inspections to make sure they comply with regulations and also to make sure no unapproved extensions are added to the original structure.

“We recommend that the building [Tiger Discotheque] be torn down, but the bars on the ground-floor level can stay,” he added.

Governor Tri agreed and explained, “We are now waiting for information from Patong Municipality about any additions made to the building’s structural plan. I believe we will have the answer soon.”