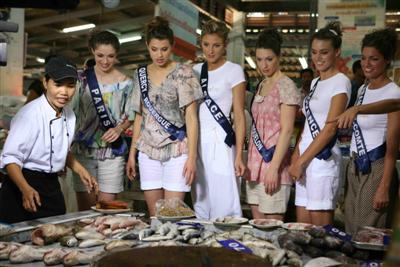 NAI YANG: Phuket’s natural beauty got even more attractive this week with the arrival of 36 Miss France contestants who are here to film a segment of the pageant to be broadcast in France next month.

On November 14 the Miss France contestants and their entourage, totaling 85 people, arrived at Indigo Pearl resort, where they will based during their stay here.

The ladies were flown to Phuket on a special XL Airways chartered flight direct from Paris.

While in Phuket the contestants will be busy doing photo shoots and other pre-event coverage as well as sightseeing, organized by the Tourism Authority of Thailand ( TAT) and Best Tours.

The Miss France 2009 pageant will be broadcast on December 6 on TF1 to an estimated 9.3 million viewers.