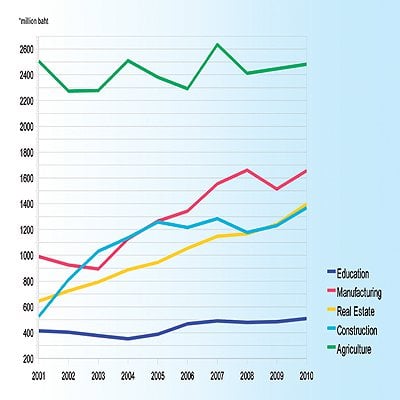 PHUKET: Thailand aims to position itself as a hub for international education and take full advantage of the ASEAN Economic Community (AEC) set to take effect in 2015, the state-run National News Bureau of Thailand reported on its website last week.

Such a bold declaration, echoing similar grand policy initiatives under the government of former premier Thaksin Shinawatra, has triggered mixed reactions from proponents and critics alike.

As Thailand already boasts one of the largest expatriate populations among the 10 ASEAN member states, it comes as no surprise that it also has one of the highest number of international schools and programs.

The International School Association of Thailand currently lists 93 member schools, a figure which continues to rise with new programs being established every year.

The presence of so many international education options gives Thailand a good base to establish itself as a regional hub, yet rigid immigration regulations could put the country at a comparative disadvantage with its neighbors in the new regional education market.

One example is the statute that requires parents of foreign children to take time off from work and take their kids out of school to queue up at the local immigration office every 90 days to report their address, even if they are in possession of valid visas and permits-to-stay.

While the establishment of the ASEAN Economic Community is expected to lead to the easing of some of these restrictions, it seems that most if not all the benefits will be reaped by nationals of ASEAN-member countries, not expat residents from other countries.

The director of one international school in Phuket told the Gazette one benefit he foresees from the new AEC trade agreement is an increased supply of more affordable, English-speaking teachers.

“If I had to choose between hiring a swim teacher from a western country and one from Singapore, both equally qualified, I would choose the Singaporean,” he said.

While an influx of qualified teachers from ASEAN states may indeed lower payroll overhead costs at schools with international programs, any such reduction is unlikely to decrease tuition fees, which will continue to rise along with the cost of living.