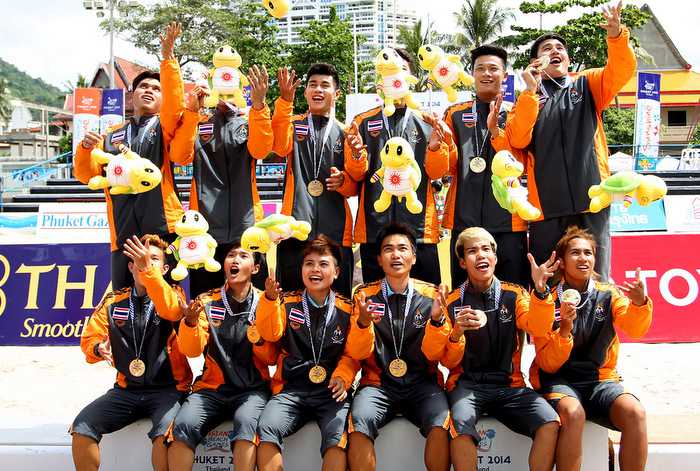 PHUKET: Thailand closed the final day of the 4th Asian Beach Games in Phuket yesterday with two more gold medals in the beach sepak takraw to be crowned official Games champions for the second time with a haul of 56 gold, 37 silver and 33 bronze medals.

On the final day of competition, Thailand won gold in both the men’s and the women’s regu beach sepak takraw.

On Saturday, a clean sweep of three gold medals in beach athletics and the in-form Muay Thai fighters helped Thailand maintain their stranglehold on the medal stakes.

Talented Thitima Muangjan, the triple jump bronze medallist at the Guangzhou Asian Games in 2010, made the country proud by producing an impressive jump of 5.52 meters to hand Thailand the day’s first gold in the women’s long jump event.

National sprinters Phatsorn Jaksuninkorn and Nongnuch Sanrat, who helped Thailand win the 4x100m relay at the Guangzhou Games, gave the country the second gold in the women’s 4x60m relay in 29.97 seconds. The men’s relay team, strengthened by the presence of SEA Games triple gold medalist Jirapong Meenapra, gave the hosts the third gold with a time of 27.17 seconds.

Thailand’s fourth gold on Saturday came from the women’s handball team, which downed Taiwan 17-12, 13-12 in the final showdown.

A total of 57.73 million baht will be paid out to all Thai medalists, their coaches and the sports associations they represent.

Meanwhile, Thai sports associations whose athletes won medals are to receive a total of 11.79mn and coaches of Thai medalists will receive payouts totaling 6.64mn baht.

One injured in boat engine explosion north of Phuket