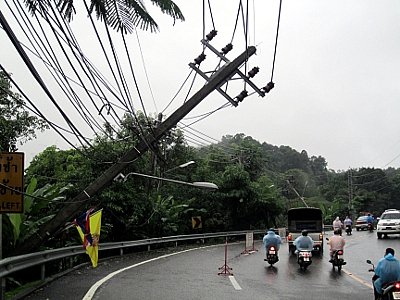 PHUKET: Phuket Highways Department engineers are today assessing the damage from a landslide that toppled electric power poles and may have dangerously undermined the foundation along a stretch of Patong Hill road yesterday.

The slide occurred at about 1pm, washing some 100 rubber trees downslope and toppling four electric poles. A crack of a few centimeters wide appeared along a 150-meter stretch of the newly-resurfaced road, from the Patong City sign to the hilltop shrine.

The crack, together with the fact that one of the power poles was also left leaning precariously over the slow lane, prompted officials to close the lane to traffic.

Surasak Jantharuek of the Patong Municipality Engineering Division said the pole was finally moved early last night and left lying along the roadside.

“We took out the pole that fell against the traffic barrier about 8pm, but we have not done anything to the other three as we have to wait for the rain to stop to set up a firm plan of action. It will probably take about a couple of days to reset the poles,” he said.

“Patong Mayor Pian Keesin has an idea to move the four electric poles to the other side of the road temporarily while we lay concrete foundations to reinforce their support structures,” he said.

The Patong Municipality Engineering Division is coordinating with the Provincial Electricity Authority to come up with a repair plan, but it will not be finalized until the current spate of heavy rains abates, he said.

Despite the damage and need to cut off power to residents in the immediate area, supply to Patong has not been affected as it is also supplied from the north in Kalim, he said.

Barriers have been erected to warn motorists about the lane closure, especially at night, he said.

However, the closure has considerably worsened traffic congestion along this dangerous section of road, referred to by some as “Mount Mayhem”.

“It’s particularly dangerous now when you get caught in traffic on a steep slope behind a standard shift vehicle with a bad driver at the wheel,” said one man who commutes from Patong to Koh Kaew every day.

Local rubber planter Wasin Sutantiwanitchakul said that the trees washed away in the slide were at least eight years old.

“The same area had two slides before this, but they did not cause this much damage. I am not sure what the total damage cost will be or who will take responsibility for it,” he said.

Also damaged yesterday was a bridge on Pra Phuket Kaew Road in Kathu. Strong currents in Bangyai Canal washed away part of the foundation, causing a five-meter-deep hole to form on the road surface.

Police placed a thick sheet of steel over the hole to allow traffic to continue to pass.