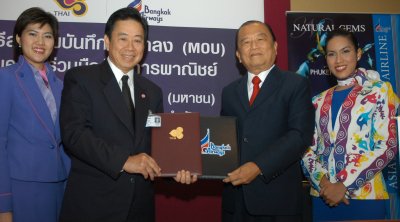 BANGKOK: Rivals Thai Airways International (THAI) and Bangkok Airways signed a Memorandum of Understanding (MOU) on Thursday aimed at helping THAI coordinate its flights with services to Koh Samui and give it better access to destinations in China.

THAI Acting President Somchainuk Engtrakul said that the signing of the MOU signifies development of network coordination between the two carriers.

“This has an impact on domestic markets such as Koh Samui – a destination that THAI does not currently serve – and aims to foster cooperation with Bangkok Airways.

“Destinations in China include Sipsongpanna, Xian, Guilin, Zhengzhou, Hangzhou and Shenzhen, all of which are served by Bangkok Airways but not by THAI,” a press release quited him as saying.

“This is a good opportunity for THAI to expand its reach in China, using Bangkok Airways’ network, to better meet passenger needs and expectations and make travel more convenient.”

The Chinese market is seen as having high potential due to its consistent growth. Figures from the Tourism Authority of Thailand show that 711,000 Chinese tourists arrived in Thailand in 2005, an increase of 12% compared with 2004.

Bangkok Airways President Prasert Prasarttong-Osoth said that Bangkok Airways and THAI will continue to cooperate in order to counter increasing competition in the airline industry.

“Cooperation between the two carriers will help strengthen both THAI’s and Bangkok Airways’ operations, increasing ability to compete in airline business worldwide and further solidifying Thailand’s position as the future aviation hub for the region.

“The two airlines’ networks will join together and open up to all groups of travelers worldwide, increasing profitability for the country,” he said.

THAI and Bangkok Airways will also look at launching coordinated tour packages that use both carriers’ services, the press release said.