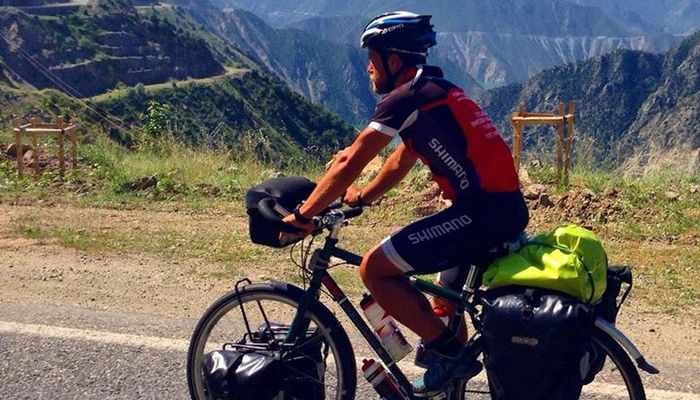 PHUKET: Despite visa delays, the team of bold Swedish cyclists peddling their way from Northern Europe to Phuket to raise funds for a post-tsunami orphanage (story here) are on target to arrive before the 10th anniversary of the 2004 tsunami that devastated the region on Boxing Day.

As of yesterday, the team was just 35km from the border of Iran in Dogubayazit, Turkey, waiting for their passports to arrive – with Iranian and Chinese visas inside.

“I think the biggest difficulty during these weeks has been the psychological part. Travelling without a passport and not knowing when we will get them back is not fun at all,” Calle Wollgard told the Phuket Gazette. “I think all four of us are a bit bored right now because we have been forced to take it really slow and easy the last couple of weeks [due to the visa situation].”

However, on Wednesday the team was given a green light on their visas for Iran and told that they will know about the ones from China by Tuesday.

“We should have our passports back by Friday,” Mr Wollgard said.

The hospitality of the Turkish people has helped Mr Wollgard, Fredrik Jessen, Tomi Blumen and Christofer Johansson deal with the low morale.

“There is a big restricted area close to the city, a military area. We set camp a little bit too close to the fence so there were some army guys coming in the middle of the night telling us that it wasn’t okay for us to camp that close,” Mr Wollgard explains. “But instead of shooting us the commander said, ‘You can stay ay my place!’ Then he showed us his apartment, a really nice one, and gave us the key.”

The team spent the next two nights at the commander’s home.

Also helping keep up morale is the fund raising, which is set to collect at least 1.5 million baht for Barnhem Muang Mai orphanage in Phuket if the team is able to tackle the roughly 2,000km of Iran and the many other rough roads leading to the island.

“The collection for Barnhem is going well. This helps our morale every day, every kilometer,” Mr Wollgard said.

Funds are being raised through businesses and individuals making pledges for each 10km the team covers. The funds will go to support Barnhem Muang Mai (here), which prides itself not only on the loving care and importance of education instilled in the children, but also financial transparency (financial records here).

Those wanting to support Mr Wollgard, his team and the orphanage can email: callewollgard@gmail.com to make a pledge.