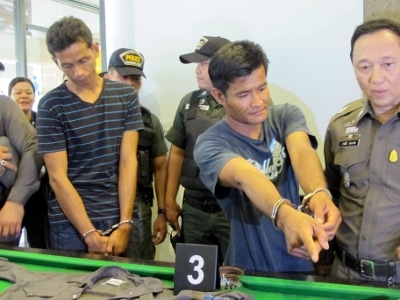 PHUKET: The man who wielded the blade in the bungled bag snatch in which Australian tourist Michelle Smith was killed on June 20 was teased into it by his accomplice, the Phuket Provincial Court heard today.

In presenting police evidence in the charges against the accused, Surasak Suwannachote and Surin Tadthong, Lt Col Boonlert Onklang of Chalong Police today read out in court the police transcript recorded during the questioning of now-confessed killer Surasak.

“Surasak told police that Surin asked him, ‘Do you think you can steal that woman’s bag?'” Col Boonlert read out aloud.

The dare prompted Surin to turn around the motorbike the pair were travelling on and pull up alongside Michelle Smith and her friend, fellow Australian Tammee Lee Lynn, and carry out the attack.

At the request of the judge, Col Boonlert also presented video evidence, including CCTV footage of the attack.

Also presented was a video recording of Surasak confessing to the press after the re-enactment of the crime on June 26.

The court watched as Surasak told the press, “I didn’t even want to stab the woman [Mrs Smith], I just wanted to cut the strap of the bag. I didn’t know she was going to die. I saw her walking away…

“I saw on the news that the woman died. I am sorry for what happened. When the police arrested me I was already considering handing myself in.”

Surin and Surasak were offered the opportunity to refute the police evidence presented in court today, but both declined.

The court adjourned at 4pm, with the judge calling for it to convene at 2pm tomorrow, when the judge is expected to deliver his verdict and hand down sentencing.

Surin is no stranger to prison life. The native of Samut Sakhon moved to Phuket about five years ago. Before his arrest for the fatal attack on Mrs Smith, he had four theft convictions and had served time in Phuket Provincial Prison.