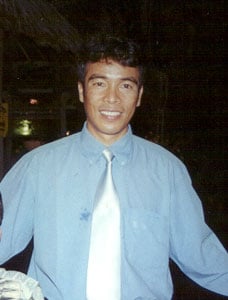 PATONG: Patong’s mayoral race hotted up today with announcements that Surasak Maneesri is back in the race, and that a fourth contender, Safari Pub owner Chairat Sukbal, has announced his candidacy. K. Surasak explained that he has already lodged an appeal, with the Administration Court in Songkhla, against an order by former Interior Minister Purachai Piemsomboon instructing him to quit his post as mayor for conduct likely to bring the Patong Municipality into disrepute. It is not yet certain whether he may run for – or hold – office while his appeal is being decided. “I don’t know what will happen in the future – that’s up to the court – but what has happened has no effect on my campaign because a lot of Patong people support me. Someone just wanted to spite me; I’ve done no wrong,” he added. K. Chairat, the owner of Safari Pub and Pasha Disco in Patong, and the Chairman of the Entertainment Club of Patong, said that he decided to run for mayor after many people pointed out to him that he had the ability to be mayor, and asked why he did not become a candidate. Unlike K. Surasak and the other contender, former mayor Pian Keesin, K. Chairat does not have a party. He explained, “I didn’t want to set up a team because I want to be free.” His campaign will focus on environment and education in Patong, he said. “If we can develop people, that means it will be easier to solve other problems, such as poverty. I’m ready to fix Patong because I have more experience and I want to use it to develop the town,” he added. K. Chairat drew the number 3 for the ballot sheets, while K Surasak drew No 4. K. Pian earlier drew No 1, while K. Surasak’s brother Chalermsak drew No 2. It is widely expected that if the court clears the way for K. Surasak to run for office, his brother will drop out of the race. More candidates are unlikely as tomorrow is the final day for registration of candidates.