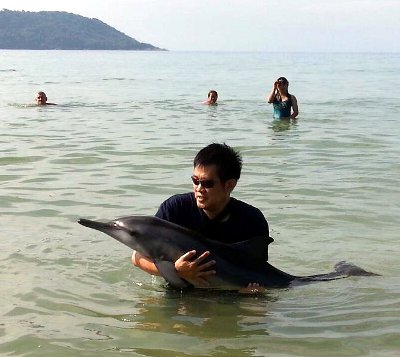 Dr Kongkiat Kittiwattanawong, who heads the Endangered Species Unit (ESU) of the Phuket Marine Biological Center (PMBC) received the report of the dolphin at about 9am, and immediately left with a team to help in the rescue.

“We went to Kata Beach, as the dolphin had been moved there by rescue workers. They moved him because they were afraid that the high waves at Karon Beach would throw the animal onto the rocks,” Dr Kongkiat said.

An attempt was made to encourage the 1 to 2-year-old dolphin to swim back into deeper water, away from the coast, but it refused, Dr Kongkiat explained

“We found fresh scratches on his skin and 12 centimeter long varicose veins along parts of its body. He could swim, but not properly, and his breathing wasn’t 100 per cent,” he said

Dr Kongkiat and his team decided to take the dolphin back to the PMBC for basic treatment.

“After the treatment we will release him into the waters between Koh Kaew and Karon Beach. The water is deep there and the waves are not too high. Moreover, we believe spinner dolphins school in that area,” he added.

At about noon today the dolphin was safely released back into the ocean. However, PMBC staff continue to monitor the dolphin’s condition as best they can.