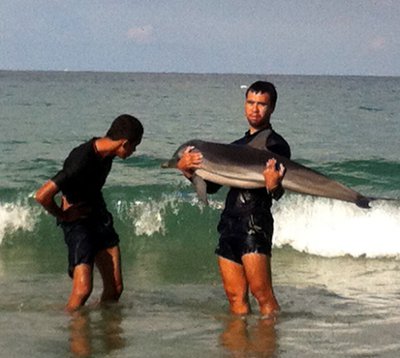 PHUKET: A stranded striped dolphin (Stenella coeruleoalba) was rescued from Kata Beach yesterday morning and is being closely monitored by the Phuket Marine Biological Center (PMBC).

The young, weak dolphin was spotted by Kata Beach Resort workers at about 9am.

The PMBC was notified and a team went to sea in order to check on the female dolphin’s condition.

“A tentative checkup revealed that there were no wounds to its skin and only some bruising on its head. However, parasites were found on her tail,” said Kongkiat Kittiwattanawong, a biologist at the PMBC.

Mr Kongkiat reported that the dolphin was able to swim, but did so lying on her side and was quite weak.

The PMBC team gave the dolphin an injection to prevent it from going into shock and then transferred the animal to the Marine Endangered Species Unit at the PMBC, said Mr Kongkiat.

Mr Kongkiat suspects that the dolphin, about 2 years old, is suffering from an internal problem.

“We will need to check her blood to see if we can determine the cause of her sickness. We will also have an ultrasound done if she doesn’t start getting better, as in the past we’ve had dolphins eat plastic rubbish, which has caused intestinal blockages and internal damage,” he explained.

Striped dolphins are often found along the west coast of Phang Nga and Phuket. A typical school usually comprises of about 50 individuals.

“This dolphin was probably separated from its school because it’s weak and couldn’t deal with the strong sea conditions. This kind of dolphin is often dismissed from its school and swims close to shore to prevent the rest of the school from catching their disease,” he explained.