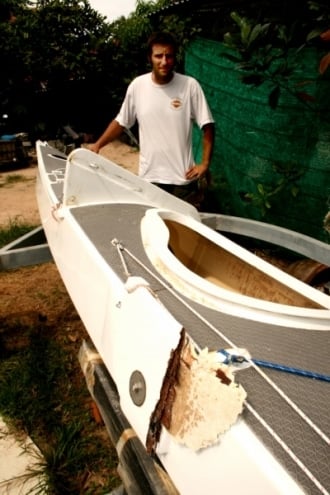 PHUKET: While paddling nine kilometers off Phuket’s southeast coast just after midday on August 24, two men in a kayak braced as a wave shattered the support beam holding together their twin-hull sailing kayak.

As strong winds lashed the raised sail, the kayak listed and seawater gushed into the left hull. The boat began to sink, and along with it its occupants’ dream of one day
paddling the small vessel all the way from Phuket to California.

With no other boats in sight, no radio, and their kayak “dead in the water”, the two exhausted men knew they had to swim for shore.

The nearest island was Koh Mai Thon, about five kilometers away.

“I’ll come back with help,” Ryan promised his friend.

The more experienced swimmer, Ryan grabbed his fins and “swam like hell” towards Koh Mai Thon while Piya stayed with the vessel, which had only one hull still buoyant.

Exhausted from paddling for the past four days, Ryan kicked his fins in the rough sea, wincing in pain as jellyfish stung his arms and legs.

After half an hour in the water, Ryan heard the spluttering of a longtail boat behind him. Turning to check if it was heading towards his friend and their idle kayak, he couldn’t see Piya or their boat anywhere. Ryan swam on.

After an hour, his feet touched the seabed and he waded onto the northeastern beach at Mai Thon. It was a beach he knew well. Just two days earlier, the duo had beached Saylee Speck there to fix a broken rudder.

Ryan ran from the beach through dense foliage and emerged minutes later at a construction site on the island’s west coast.

“My friend is in trouble. Our boat is sinking, please help,” Ryan said in Thai to a group of construction workers.

Ryan and three men rushed to the nearby pier, ready to jump in a boat to help Piya.

But as they emerged from the jungle, Ryan stopped dead in his tracks, slumped onto his knees and exhaled a few huge sighs of relief.

A longtail boat tugging a torn section of the duo’s kayak was docking at the pier. Piya was waving from the front of the boat.

The other half of their vessel was now at the bottom of the sea, but the two kayakers had made it safely to land.

“What am I going to tell our sponsors?” Ryan asked himself.

Just five days before their boat sank the duo were at a secluded spot on Rawai Beach. The kayakers, one of their sponsors and a few friends watched in silence as boat builder Suphan Changsak blessed the Saylee Speck and tied flowers to her mast.

Minutes later, Ryan and Piya pushed off into the water, embarking on their 10-day maiden expedition.

The voyage was meant as a “test-run” for their planned 14,000 mile paddle from Phuket to California, passing through waters off Indonesia and Siberia.

The trip was due to start in October.

Over the next four days, the duo paddled from Koh Lone to Koh Phi Phi Don, stopping at Koh Mai Thon to repair the broken rudder.

It took them 19 hours to reach Koh Phi Phi Don. They arrived just after 1am, slept on the beach and decided to cut short their voyage and head back to Phuket for more repairs.

They left Koh Phi Phi Don just after 6pm on day four of their maiden voyage.

About 18 hours later Saylee Speck was snapped in half and sinking to the bottom of the sea.

A few weeks later, the remains of Saylee Speck languish in a corner of a Nai Harn boathouse. Ryan and Piya say their trans-Pacific dream is on hold.

Ryan told the Gazette that when he watched the kayak go under, he saw two years of planning sink with it.

“We are just glad it happened close to Phuket and not in a remote location on our way across the Pacific,” Ryan said.

It was in January this year when the duo announced their ambitious plan to paddle through some of planet’s most treacherous expanses of ocean for 20 months.

They first planned to paddle in a 20-foot wooden kayak Saylee (liberty), leaving on March 10.

Many Phuket residents were quick to slam the pair’s plan as overambitious, dangerous and under-planned. Even their parents branded their trip “crazy”, but the kayakers were undeterred.

A funding problem halted their initially-scheduled March departure until a sponsor pledged US$25,000 to build a new, larger and stronger kayak.

Work on Saylee Speck began in May and finished mid-August.

Boat builder Suphan says “we can rebuild” and seems confident he can make a more durable sailing kayak.

After talking with their sponsors, the Phuket-California voyage has been postponed until next year at the earliest.

But Ryan says he will embark on a solo voyage later this year.

“I am going to do a three-month solo expedition in our first kayak, Saylee, along both the west and east coasts of Thailand,” he said.

He plans to leave by November this year.

“It was never going to be easy, but we will stick it out. The dream will become a reality,” he said.