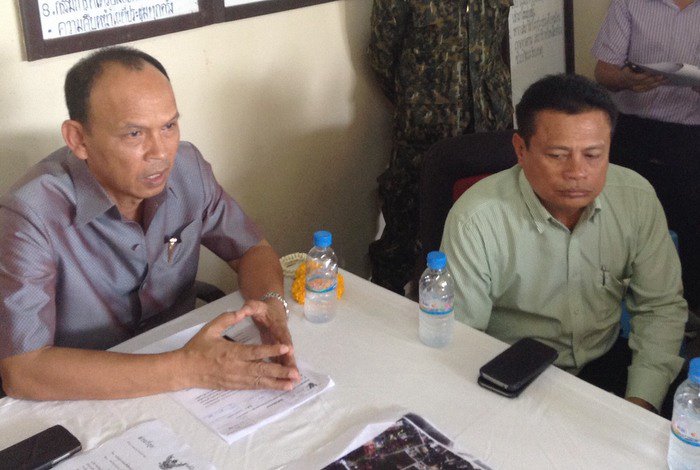 PHUKET: Officers are now searching for the exact location of an old mining concession in Chalong, after squatters refused to move from a disputed 70-rai property in the area.

Sra Ton Po villagers have remained firmly rooted to the piece of land and even filed a complaint to the Damrongtham Center (ombudsman’s office) claiming that the Chanote title holders of the property had sent ‘men in black’ to threaten them for encroachment (story here).

“If officers can locate the land for mining concession number 6700/8260 and it is not for the land that we are currently occupying, we’ll move out,” said village representative Rornmae Sangkhao.

“Normally, when a concession has expired, the land will become government land, it will not be gobbled up by private owners.”

Mr Rornmae explained that the villagers were hesitant to leave the land because they had been living on it since 2003, years before the owners came forward with a Chanote in 2013.

Nonetheless, the owners have jumped through multiple hoops to prove that the Chanote was real and legally acquired.

Suthon Thaweesuvann, the lawyer of land owners, has denied that there was any concession for his clients’ land to begin with, saying that the permit presented by villagers for the mining concession was for a different plot of land.

Vice Governor Somkiet Sangkaosuttirak agreed to the villagers’ request to determine the exact plot of land under the mining concession.

“All relevant offices continue to confirm that the Chanote does not overlap with government forest or mangrove land,” V/Gov Somkiet said. “However, we will do our best to be fair to both parties. We will track down the mining concession.”

Some of the villagers have already moved off the land, but many others have encroachment cases that are still in legal process.

“We dropped our complaints against those who moved off the land. However, there are many cases that are still in the court, as we have been unable to negotiate successfully with the encroaching villagers,” Mr Suthon said.