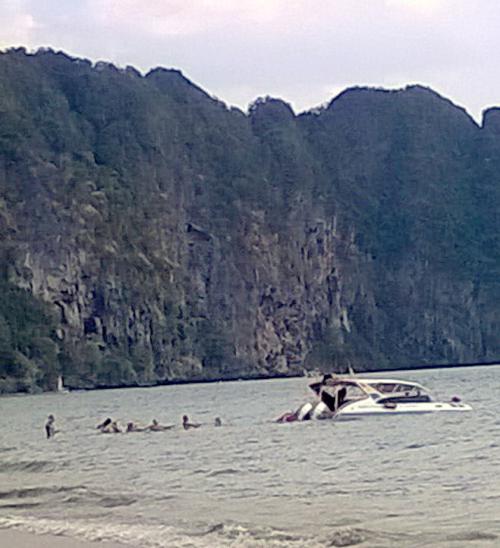 PHUKET: All 37 tourists made it to shore yesterday after two speedboats collided at sea about 1km from Krabi.

Krabi City Police were informed of the incident at 3:30pm and immediately contacted the Krabi Marine Office to scramble a rescue team.

Six were injured when the Chainartnumchork 8, owned by Barracudas Tour, and the The Pimmasa 5, owned by Centara Grand Beach Resort and Villas Krabi, crashed near the popular tourist destination of Ao Nang.

Jorsen Anderson, 27, and his 4-year-old son, Anton, were seriously injured in the accident and taken to Krabi Hospital, Sophon Kongthong of the Krabi City Police said.

They were later transferred to Bangkok Hospital Phuket, where a staffer reported that Mr Anderson was suffering from chest pain and his son had a broken leg.

“Chainartnumchork 8 was going too fast and rammed us,” Captain Anan Khaothong of The Pimmasa 5 told the Phuket Gazette.

“Water started pouring into the boat and as it was sinking, tourists jumped into the sea,” Mr Anan added.

Despite damage to the bow of the Chainartnumchork 8, it was able to make it back to Ao Nang Beach.

The Krabi Marine Office is continuing its investigation into the accident.

Police have yet to charge anyone over the incident.