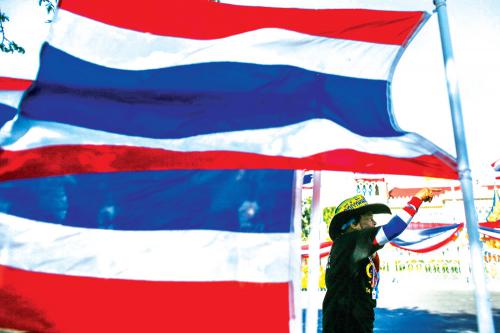 PHUKET: As Thailand begins a new year, the country finds itself at a crossroads. What seems to be at stake is not only the future shape of democracy in this country, but whether it will even remain a democracy at all. This should worry all those who care about the future of Thailand and its people.

The People’s Democratic Reform Committee (PDRC) is determined to bring down Yingluck Shinawatra’s government. They want to uproot the Thaksin regime and replace it with a “People’s Government”. They want a People’s Assembly to serve as the legislative branch of this brave new administration, and to draft legislation that would reform Thailand’s political system.

They insist that they are not anti-democracy, but support a cleaner democracy – one not corrupted by capital.

The group, led by former deputy PM Suthep Thaugsuban and several old faces from the People’s Alliance for Democracy, claim the Constitution allows them to do this. Article 3 of the charter says sovereignty of the country “belongs to the people”.

Once Ms Yingluck has resigned, an eventuality the PDRC is plainly aiming to achieve, there will be a power vacuum. The PDRC then wants to invoke Article 7 of the charter, which says that when no part of the document seems to apply to the situation, the country should follow conventional democratic practice.

Since the country has been ruled by appointed prime ministers before, this would allow the head of the Senate to appoint a new premier, who would in turn bring in a new government of technocrats – “good people”, using the protesters’ term of choice.

A new People’s Assembly would then replace the Parliament. Its 400-strong membership would comprise 300 representatives from professional organizations, and 100 appointed by the PDRC. This assembly would then set about “reforming” Thailand’s corrupted political system.

The PDRC is right to say the system is in need of reform. Politics remains deeply corrupt. Vote buying, as the protesters claim, is indeed rife. But to claim that Pheu Thai buys elections entirely through the purchasing of votes, as the PDRC has claimed, is to grossly oversimplify the situation. The reality is that – for all his serious flaws – Thaksin Shinawatra and his proxies are the party of choice for millions of Thais.

A further oversimplification is the suggestion that only one party engages in vote buying. All the parties play the votes for notes game. Studies have shown that some voters take money only from the party they intend to support, while others take money from every party, then vote for their preferred candidate anyway. Paying for votes is the price you pay to play the game, as academics Chris Baker and Pasuk Phongphaichit have argued. It does not guarantee victory.

One further cause for caution is the leader of the protests himself. Those who have lived in Phuket long enough may remember a little of Suthep Thaugsuban’s questionable record. In 1995, as Agriculture Minister, he was responsible for the SorPorKor 4-01 land reform scheme, in which the deeds to plots of empty land were supposed to be distributed to poor farmers around the country.

In Phuket, an investigation revealed that 11 of the island’s richest families were among the recipients of this property. The accusations had enough credibility – and seriousness – to bring down Chuan Leekpai’s Democrat government. This fact should serve as a strong signal that this conflict is driven by a lot more than just revulsion to corruption.

To lose faith in democracy at this point in Thailand’s development would be a mistake. The system is highly flawed. But one has to wonder what kind of reforms the PDRC might carry out that could somehow ensure that when democracy is restored – within about 18 months – it is suddenly, miraculously clean.

The PDRC claims to be a peaceful movement, and so far the protests have been relatively free from violence. But those observers who support the principles of human rights and free speech have good cause to wonder what kind of reforms Mr Suthep and his fellow leaders have in mind – reforms that we are led to believe will succeed in cleaning up Thai politics where others have failed.

A nation does not make a better democracy by abandoning democracy.