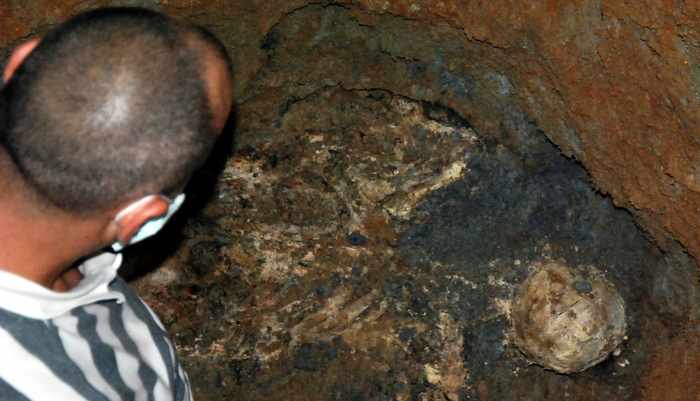 CONFESSED killer Moshe David is expected to be sentenced on Monday for the gruesome 2012 murder of fellow Hungarian Peter Reisz. Although police believe he will escape the death penalty, they do have faith he will be handed a “very long sentence”.

Following Mr David’s first murder trial will be a second, for the murder of another Hungarian, Laszlo Csapai. Surat Thani Provincial Police have said they have enough evidence to convict Mr David with a second murder conviction.

PHUKET: Nearly two years since his arrest at a Bangkok shopping mall, confessed killer Moshe David is to be sentenced on Monday for the murder of fellow Hungarian Peter Reisz in Phuket in 2012.

The body of Mr Reisz was found with hands bound, dumped in a rubber plantation on the Kathu side of Patong Hill on November 30 that year.

The gruesome discovery set off a nationwide manhunt, with Mr David taken into custody six days later, after police found blood stains and a kitchen knife in his rented home in Wichit.

An Israeli with dual nationality, and named Nemeth Gabor in his Hungarian passport, Mr David confessed to killing Mr Reisz in a fit of rage after Mr Reisz had allegedly swindled him out of land and properties valued at 15 million baht.

Despite the confession, when the trial began in February this year, judges ordered a media blackout on reporting it, amid concerns that media reports would affect the testimony of other witnesses.

However, by that time the second suspect wanted for the murder of Mr Reisz had already corroborated Mr David’s confession to the killing.

Gyorgy Lajos Kvalka surrendered to Samui Police on December 8, 2012, and testified in his statement that Mr David killed Mr Reisz during a fight in a house near where Mr Reisz’s body was dumped in Thung Thong, Phuket.

Mr Kvalka denied any role in the killing, but confessed to assisting Mr David with disposing of Mr Reisz’s body and mopping up the blood at the scene of the crime.

Somchai Panomrak of the Phuket Public Prosecutor’s Office told the Gazette this week that Mr David is very likely to escape the death penalty for the slaying.

“But he is expected to be handed down a very long sentence,” Mr Somchai said.

However, as one murder trial is brought to a close, Mr David will soon face another murder trial – for the murder of 39-year-old Hungarian businessman, Laszlo Csapai in Samui.

“After the trial in Phuket has concluded [on Monday], Mr David might appeal the decision or the sentence and he will remain in Phuket while any appeal is heard by the court,” said Surat Thani Provincial Police Deputy Commander Somkiat Kaewmuk.

“But after that, he will be transferred to Samui, where he will be detained while he is tried for the murder of Mr Csapai – and continue to serve whatever sentence is handed down on Monday.”

Col Somkiat is confident that his officers will secure a guilty verdict against Mr David, despite going to trial without the testimony of a key witness who tipped off Samui Police about the whereabouts of Mr Csapai’s skeletal remains in April last year.

Officers found the remains of Mr Csapai – a millionaire who founded a Hungary-based clothing store franchise found throughout Eastern Europe – buried under a luxury villa owned by Mr David on Samui after a tip-off from the Hungarian police.

The witness, who claimed he had “seen” Mr David bury the body, was being detained by the Hungarian authorities when he informed police where to find the remains, but he is now free and will not be brought to Thailand to testify.

Bo Phut Police Deputy Superintendent Napha Senathip declined to reveal the identity of the alleged witnesses or any details of why he was being detained by the Hungarian authorities, and then set free.

“We sent a request to Royal Thai Police headquarters [in Bangkok] for permission to travel to Hungary to question the witness, but our request was declined,” Col Somkiat told the Gazette on Tuesday.

“We only knew that the witness was in Hungarian custody for a month. We do not know what he was jailed for, and we were told that he went to England after he was released.”

Col Somkiat explained that Mr Csapai’s relatives offered to cover all travel expenses to Hungary and even to London to pursue the investigation.

“But still our request [to Bangkok] was denied,” Col Somkiat said. “We were told that extraditing a person only as a witness was a very long, complicated process, even if the person was in custody in a foreign country.

“It’s even more difficult to extradite a witness who is a free person in the UK.”

Regardless, Col Somkiat expects DNA matching and CCTV footage to provide the evidence his officers need.

“We believe we have enough evidence against Mr David to gain a conviction for the murder of Mr Csapai, even without the witness,” he said.

“We have CCTV footage showing Mr David picking up Mr Csapai from Samui Airport before Mr Csapai was reported missing by his wife.

“After Mr Csapai was reported missing, Samui Police called in Mr David for questioning, and he admitted that he picked up Mr Csapai from the airport.

“Although he said he had no idea where Mr Csapai might be, Mr David was still the last person seen with the victim. This, along with DNA confirmation from the Institute of Forensic Medicine at the Police General Hospital in Bangkok that the bones found are those of the late Mr Csapai, is enough to press a murder charge.”

Lt Col Napha confirmed on Wednesday that the paperwork is being processed.

“We will apply for an arrest warrant for Mr David so he will be transferred to Bo Phut to face trial as soon as all the legal options for his trial in Phuket have been exhausted,” Col Napha said.

Col Napha added that any sentences handed down to Mr David for the two murders would have to be served separately.

“If Mr David is found guilty of the Csapai murder, any sentence handed down would have to be served separately from the sentence to be handed down on Monday for the Peter Reisz murder,” he said.