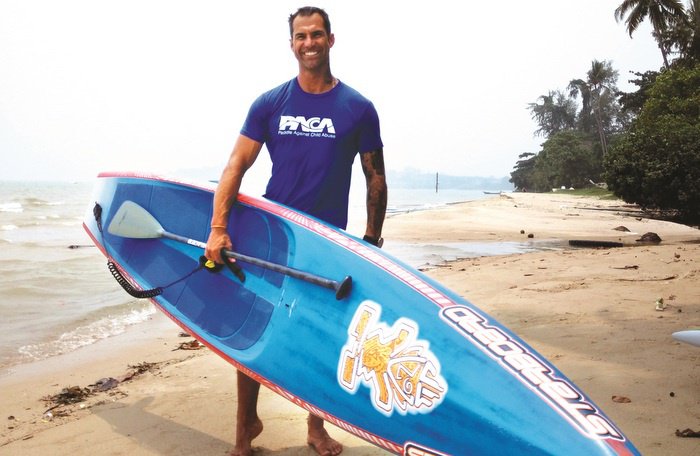 PHUKET: A great white shark knocked Damien Rider from his paddle board during one of eleven shark encounters he faced as he paddled 800 kilometers from Rainbow Bay, Gold Coast, to Bondi Beach, Sydney, in January 2015.

However, the demon that he was battling wasn’t below the ocean’s surface, but in the vivid world of abuse that he endured as a child.

Now, 33 years after he was first scarred by the violence of his mother’s boyfriend, he is doing everything in his power to raise awareness of child abuse throughout the world.

Mr Rider’s latest effort lands him in Phuket, where he is training at Phuket Cleanse and Thanyapura before embarking on a circumnavigation of the island – a four-day journey by standup paddle board – for his self-funded organization: Paddle Against Child Abuse (PACA).

While training, Mr Rider is also sharing his story with many students on the island, such as those at Phuket International Academy.

“From the age of six, my mom’s boyfriend came to live with us. I never grew up with a father, so he was the only man who came into the house,” Mr Rider said.

“My introduction to him was [the sight of] him beating police on the front lawn and then coming in and bashing my mom and then grabbing us and throwing us.

“It happened week after week. All the time I would just have to brace myself.”

The rest of Mr Rider’s childhood was filled with more abuse, and his constant attempts to flee it: sleeping in rock caves and under jetties – anywhere that he could escape to.

“The problem is that the bruises go away, but the emotional scarring lasts a lifetime, which is where the post traumatic stress disorder [PTSD] comes in. With PTSD, things from everyday life trigger those emotions from back then and put you back in that space.

“I was on a roller coaster of life really, just going through drugs, alcohol, everything to try to suppress the feelings and the emotions, the memories and just the visuals that come into your head.

“I had successful businesses, and I tried every way to make myself happy by making money, and that didn’t work,” Mr Rider said.

However, the tipping point came when Mr Rider opened up to someone about his childhood and didn’t get the response he needed.

“After going through many years of it, I had a breakdown and considered suicide as a final option to stop the pain and thoughts from my childhood.”

Instead, Mr Rider realized that he needed to face PTSD head-on, so that he could perhaps someday inspire past and present victims to speak out about it.

“I knew I was making a conscious decision to break the barriers and break the cycle I was in,” Mr Rider said.

That’s when he, who had been a lifelong skateboarder and surfer, took to prone paddle boarding, spending hours in physical pain, completely alone in the ocean, as he propelled himself forward with only his hands. But swelling up with that physical pain was the emotional pain of his childhood.

“It was pretty tough on me at the start, plus you are out in the open ocean, feeling quite vulnerable. There is no protection, no security blanket, just you and the ocean. Anything can happen and you just have to kind of go with it.

“Once I found my peace, or I thought I had, I decided to do my paddle to inspire victims. I had thought about doing things for kids before, but thought it would be hypocritical, because I hadn’t found my peace.”

In a media stunt to raise awareness for his organization PACA, and to start real dialogues about child abuse and its many forms in Australia, Mr Rider took on the unassisted 800km paddling trip.

“The furthest I’d ever paddled before was 40 kilometers, and here I was about to paddle 800km alone,” says Mr Rider, who broke three world records on his epic voyage. “I love the challenge of pushing myself to the very edge and finding out exactly what I’m capable of.

“Once I finally got into Bondi, I realized for the first time in my life that I had found peace and I knew who I was and that I was proud of the who I am.”

Child abuse can be found everywhere in the world, including Australia and Thailand, Mr Rider pointed out.

Many children in Thailand are victims of physical or sexual violence or abuse. Many of these cases are never reported, as the children are afraid of reprisal and still don’t have access to the infrastructures that help them report them, Humanium, an international child sponsorship NGO dedicated to stopping violations of children’s rights throughout the world, states on its website.

“Generally speaking, these children are victims of abuse within the family or at school,” Humanium notes.

A 2002 study cited by United Nations Children’s Fund in the 2012 report ‘Child Maltreatment: Prevalence, Incidence and Consequences in East Asia and the Pacific’, found that 30.3 per cent of 212 polled grade six students reported experiencing physically violent acts from both parents. Another cited study, from 2010, found that 16.7 per cent of 1,052 Bangkok residents between 16 and 25 reported experiencing physical abuse as a child.

“In this situation, the children consider the abuse as a punishment and try to hide their pain because they feel guilty for misbehaving. For that reason, children comply with the situation, believing it is a normal part of their life,” the Humanium website states.

Phuket children are most at risk to these types of abuses, explains Urai Maidukem, of the Phuket Shelter for Children and Families on Koh Sireh.

“Nowadays, children are left alone at home, or handed over to caretakers while their parents are at work. These children do not receive enough love or family time,” Ms Urai said.

“We don’t see a lot of children in Phuket being physically abused. However, regular violent confrontations between parents can have deeply scarring effects on children – more so than direct physical violence.”

Issues within families stem from complicated situations that are not helped by social media, which often alienate children and parents from each other, Ms Urai said.

“Each family has it’s own unique problems and we cannot always get to the root of it. We lend a hand and it sometimes ends with us mediating a discussion among family members. Though this works sometimes, other times there are reoccurring issues forcing us to start over again.”

In addition to welfare officials, teachers also have a role to play in combating child abuse, explained Jakgrit Siriwat, deputy director of the Department of Student Affairs, Satree Phuket School.

“Teachers are told that they must know their students very well. They must be sensitive to whether or not a student is having issues at home,” Mr Jakgrit said. “Teachers might even need to visit a student’s home just to ensure that the child is in a safe environment after school.”

At the same time, teachers must watch each other to ensure physical violence isn’t being used as a form of discipline.

“Violence is prohibited in schools. A teacher caught being violent with a child will be fired,” assures Chalam Attatham, the director of the Phuket Primary Educational Service Area Office.

Anyone with evidence of a teacher physically punishing or abusing a student can report it to a councilor, the director of the school or to police, confirms Mr Chalam.

Those fearful of their complaints falling on deaf ears, or of retribution, can anonymously send evidence to the Damrongtham Center (Ombudsman’s office).

“Students who are abused by their teacher can come to us or send evidence to our office inside Phuket Provincial Hall. We can also be contacted by phone at 076-213 203,” says Damrongtham Center Chief Prapan Kanprasang.

Police will also investigate any claim of child abuse made by the victim or a third party, confirms Maj Nucharee Longkaew of Phuket City Police.

“These are not cases that are published by the media, like many other crimes,” Maj Nucharee says.

Notable exceptions are when the abuse includes extreme violence, such as the case of the 12-year-old Karen girl who was allegedly kidnapped, enslaved, tortured and scarred over half of her body by a couple in Kamphaeng Phet in 2013. Or, just earlier this year in Phuket, when a manhunt was launched for Somsak Yakob, who dropped off the body of a baby at Vachira Phuket Hospital after the child’s mother had left the infant in his care for the day.

“If we receive a report from a third party, we have to establish whether or not the child is being abused. If the child is abused, we can remove him or her from the dangerous environment without the permission of the guardians.

“The most important thing in these cases is taking care of the victim,” notes Maj Nucharee.

To do this, police coordinate their efforts with the Department of Social Development and Welfare in Phuket and other child protection foundations.

“I would like to urge anyone who witnesses abuse to report the issue to us. This is not just a family problem; this is a problem in society as a whole,” Maj Nucharee says.

“Some victims are not brave enough or are unable to cry out for help. Neighbors should do their part in protecting children and call either the police or social welfare officials.”

Local community volunteers at the Phuket Shelter for Children and Families can be contacted on a 24-hour hotline: 1300. Those needing immediate refuge can seek help at the shelter, which is open 24 hours a day and can be reached at 076-213315 or 076-218165.

Despite having been made ‘Men’s Health Man of 2015’, Mr Rider himself is readily available to inspire and comfort those in need. His journey can be followed on his Facebook page: Damien Rider, or on Instagram: damienrider_paca.

“Some of the people who’ve privately messaged me have said they were sharing information that no one even in their family knew about. They’ve never spoken to anyone,” Mr Rider said. “I read and reply to everything and it provides the motivation while I’m out there.”