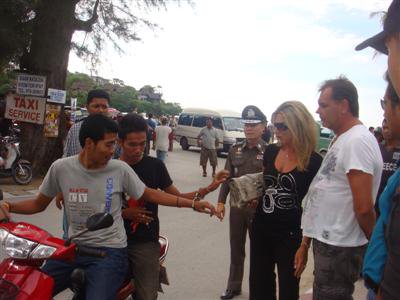 KAMALA, PHUKET: A pair of of English tourists will leave Phuket today with no pictures of their holiday to show friends back home – thanks to the depredations of a trio of thieves in Kamala.

The  press conference included a re-enactment of the crime.

Englishwoman Alyson Ashforth, 30, and her companion Nicholas Gilmore were walking back to their room at the Aquamarine Resort & Villa at about 10:30 Sunday evening when the thieves struck in front of the Rajaprajanukroh 36 School on the beach road.

Ms Ashforth filed a complaint with the Kamala Police, telling officers that, as she was shifting the position of the bag from one shoulder to the other, three men approached from behind on a motorbike, snatched the bag and sped off.

The bag contained a Sony digital camera, some hand gel and cosmetics, she told police.

Realizing the trio didn’t pick up any cash in the heist, Kamala Police officers expected them to remain on the prowl.

As snatch-and-run crimes are, according to the police, uncommon in the area, the Kamala officers coordinated with neighboring Cherng Talay Police in trying to find the culprits. The effort paid off: two of the three suspects were taken into custody on Srisoonthorn Rd Soi 11 in Cherng Talay about half an hour later.

The two were identified as Jirawat Salee and Manoon Manabutr, both 18 years of age – not minors as reported by another media outlet.

Court indictment was scheduled for today on charges of conspiring to commit a snatch-and-run theft using a vehicle, charges which could land them in prison for up to seven years and six months.

The third suspect remains at-large and police are searching for him now.

With their camera returned to them, all its photos deleted, Alyson and Nicholas were scheduled to return to England today after a 14-day holiday in Phuket.

“We want to know for sure, before we go back, that those guys are going to jail because they deserve it, ” Ms Alyson said at the re-enactment.

“One thing we don’t understand is why they had to view and delete all the photos in our camera. Those photos really meant a lot to us,” she said.

“Phuket is not a bad place to go on holiday at all. Even though we had a bad experience our first time here we will be coming back again,” she added.

Fabio! Your wallet’s in Phuket