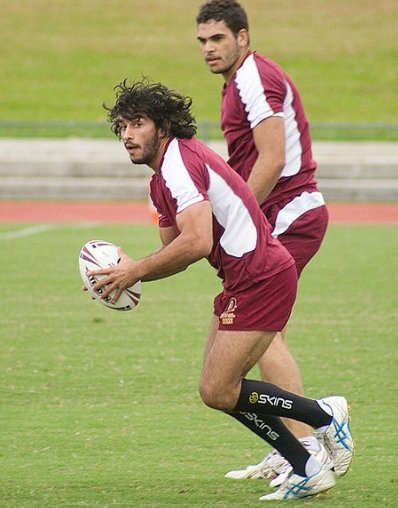 PHUKET: Australian rugby league fans in Phuket and especially those from Queensland were treated to a fantastic display of football skills in the State of Origin’s deciding game played in Brisbane yesterday.

The end game and result were never much in doubt even with New South Wales (the Blues) winning the second encounter in Sydney two weeks ago.

Queensland (the Maroons) applied early pressure and controlled the ball beautifully. On 15 minutes the ever-dangerous Billy Slater crashed into the Blues line. While being swallowed up he managed to offload to Jonathan Thurston who then kicked through for Greg Inglis, and with a full length dive Inglis managed to touch down in the left corner.

Thurston’s kick from the side-line was immaculate and Queensland were up 6-0.

For the next 10 minutes the Maroons pummeled New South Wales’ line, but the Blues at this point had played 81 per cent of the game in their own half and cracks were appearing.

On 25 minutes and after five drop outs, the Blues capitulated as Slater passed to Sam Thaiday and he dived over to the left of the uprights. An easy conversion for Thurston in front of goal put Queensland 12-0 ahead

Cameron Smith added another try immediately after the restart from almost the same position as Thaiday’s previous score when he burrowed over from dummy-half. Thurston added the conversion and the Maroons were 18-0 up after 33 minutes.

Shortly after, Jharal Yow-Yeh picked up a loose ball which had bounced off Minichiello and flung himself over the line for Queensland’s fourth try. Thurston, needless to say, converted again.

New South Wales was then on the receiving end of some good luck when Darren Lockyer, playing in his final Origin series, fumbled a loose ball and Minichiello dived over. With Soward’s conversion, the gap closed to 24-6.

One minute before the whistle was due to be heard for half-time, the Blues fed the ball wide to Gasnier. His pass to Uate gave the big Fijian room to score and New South Wales went in to the break at 24-10 after Soward failed to add the extras.

On 64 minutes Slater found another gap and ran in the Maroon’s fifth try. Smith took over kicking duties following Thurston leaving the field with knee ligament damage and converted to give Queensland a 30-10 lead.

With 10 minutes remaining on the clock, Greg Inglis used his massive strength to power his way over the line even with three Blues players hanging off his frame. Smith couldn’t add any further points with his kick, though a lead of 24 points meant Queensland had one hand on their sixth Origin series.

Jarryd Hayne sparked hope for New South Wales moments later when he burst through a gap and went over the line. Cameron Smith foolishly tackled Hayne with his knees which gave away an eight-point try. Soward added the conversion and suddenly the score was at 34-18.

Even with New South Wales scoring the last try it was too little, too late. Uate passed to Bird wide on the right who dived over and with Soward’s conversion that was the final score of the match.

While Queensland took the series 2-1 and their sixth State of Origin title, New South Wales can only look back at that 15 minutes in the first half when the Maroons put 24 points on the board and wonder how that was allowed to happen.