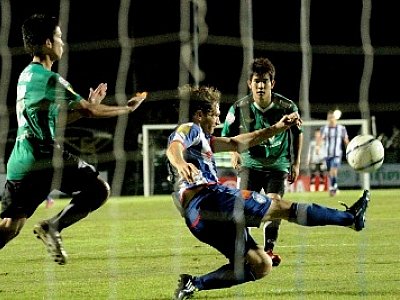 Phuket started the game in lively fashion, but found Sri Racha difficult to break through. But a superb passage of play from Phuket on 15 minutes gave Nirun Phanthong space to cross from the left and new signing Tamishi Hayiyuza headed home his first goal for the club.

The first-half ended with Phuket holding a slim one goal advantage and after the restart the home side drove forward looking to capitalize on their lead.

Five minutes into the second-half, Phuket were awarded a penalty after Kone Adame was hacked down in the box. Nene Bi Tre Sylvestre stepped up for the spot kick, but drove his shot straight at the keeper.

Phuket held on admirably until the 74th minute when a Sri Racha free kick rebounded to Diego Robert and his volley found Phuket’s net.

The game ended with that 1-1 scoreline and Phuket will wonder if that missed penalty will return to haunt them for the away leg in Chonburi next Wednesday.

FC Phuket will train on Thanyapura Sports and Leisure Club’s synthetic surface over the following two days in preparation for their second leg match. Sri Racha’s Suzuki Stadium has a similar surface and FC Phuket coaches wisely decided to get used to the surface prior to the big game.

Six of the best for Queensland