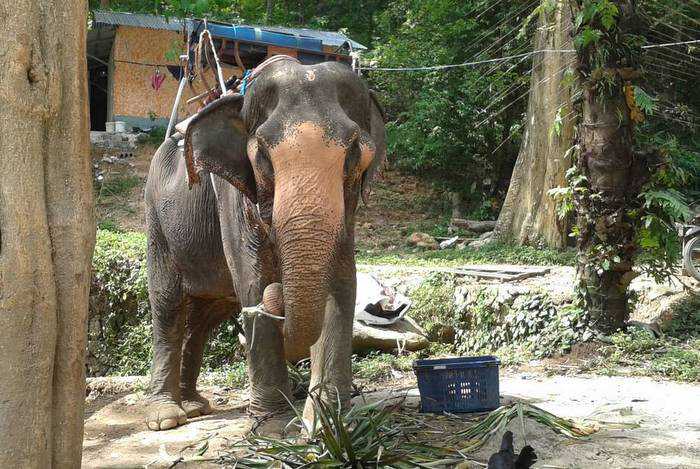 The pachyderm push-out came ahead of a Phuket Livestock Office raid this morning.

“We confirmed that the elephants were removed from the island and taken to Krabi province. The owner has secured a permit allowing them to stay there,” Phuket Livestock Chief Weerasit Putthipairoj said.

The illegal elephants came to officials’ attention after locals filed a complaint about the smell of them, as well as the amount of noise they were causing (story here).

The Noparat Elephant Camp, a new enterprise based in Kathu, does have five legally-registered elephants, confirmed Mr Weerasit.

“Those elephants have been checked. Their microchips have confirmed that they are legal and registered in our database,” Mr Weerasit said.

“However, I still believe that there are many elephants being smuggled onto the island. The limit on the number of elephants allowed is difficult to manage.”

Mr Weerasit explained that depending on what type of complaint is filed about an elephant, a different regulatory agency would have to manage the situation, which often complicates matters. Additionally, the regulation citing the maximum number of elephants on the island does not stipulate a penalty for a breach of the regulation. However, a past case saw the owner fined 5,000 baht (story here).

“I wish we could amend the regulation so that it is more suitable for our current needs,” Mr Weerasit said.