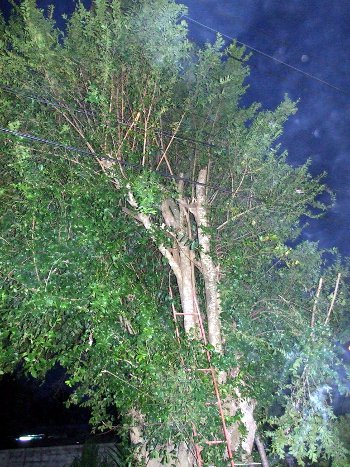 PHUKET: A Burmese laborer fell to his death yesterday after suffering an electric shock while trimming tree branches in Chalong.

Chalong Police were informed of the accident just after dusk.

At the scene, inside the Andaman residential estate off Chao Fa West Road, officers found the body of 53-year-old laborer Nui Yong.

He had suffered severe head trauma after falling several meters off a ladder and landing on the concrete below.

Near the body police found a sickle and an exposed, live electrical cable.

The metal ladder was still leaning against the tree he was working on when he fell.

Metal ladders are seldom used by professional electrical workers in Thailand. Many prefer the safety of traditional bamboo ladders, which are light and non-conductive.

Police believe Mr Nui accidentally cut through a high-voltage wire and suffered an electric shock, knocking him unconscious and jolting him off the ladder.

He probably died instantly when his head hit the ground, they said.

Rescue workers from the Phuket Ruamjai Kupai Foundation took his body to Vachira Phuket Hospital for examination and storage until it is claimed by relatives.