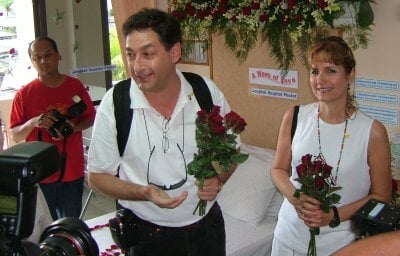 PHUKET CITY: In a year when it seemed that almost every story concerning Phuket was relating bad news – with perhaps the exception of Hannes Bergstrom, the “unidentified” Swedish toddler reunited with his uncle and grandmother two days after the tsunami – ending these 12 months with a story of hope is a newspaper’s dream.

December 26, 2004 saw Ron Bombiger, a former Israeli Army officer, and three other members of his family injured by the tsunami on Kamala Beach. Tired, battered and confused by the devastating events, they were rescued and taken to Bangkok Phuket Hospital for treatment.

But this was not the first time the pair had been in the same place at the same time.

Mr Bombiger and Dr Nitzan were born in the same town – Ramat Gan, near Tel Aviv – and went to the same primary school. “Our homes [in Ramat Gan] are hardly any distance from each other, and Dorit’s father was the General in charge of the army base where I was stationed,” Mr Bombiger told the Gazette, “but we had never met before.”

Since their paths crossed a year ago on Phuket, Mr Bombiger and Dr Nitzan kept in touch, and this afternoon they decided to return to the hospital together. This time, the only thing on Mr Bombiger’s mind was made clear in a hushed aside to his cousin – “Did you remember the ring?”

“The first time I met her was when I was lying on this bed in this room – number 432. We met, she cared for me, and we fell in love,” said Mr Bombiger to a round of applause.

“So it’s kind of appropriate that we’re here again today, not only for this [his proposal of marriage], but for the first anniversary of the tsunami, too.”

Mr Bombiger had special words of thanks for the Thai people who saved his life on Kamala Beach, and for Dr Pongsakorn Eamtanaporn of Bangkok Phuket Hospital. There was also a heartfelt reunion between him and Kennerth Carlsson, one of the hospital’s international coordinators.

Perhaps surprised by the media interest in their story, Dr Nitzan took time to thank everyone involved in caring for Mr Bombiger, ending with a simple, “You are in our hearts forever.”

Although Ron and Dorit have not yet set a date for their marriage – “We’ll know in a couple of weeks,” said Mr Bombiger, what is certain is where they will live.

Dr Nitzan is due to take up a position with the World Health Organization in Belgrade, and they will make their home there.

And no, the ring had not been forgotten.

The Gazette wishes them every happiness.