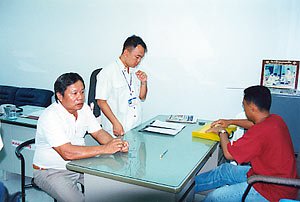 PHUKET TOWN: A Taiwanese fisherman arrested today in possession of 42 shark fins could face up to 10 years in jail as an example to others, according to the Marine Police. After a tip-off, Phuket Marine Police nabbed the man when he moored his boat, “Jufusun”, at Rassada Port at about 11:30 am. The man, subsequently named by police as Chua Teng Juan, 54, left the boat carrying a large white, bloodstained bag. When police asked him to open it, they found the shark fins. A worldwide campaign has been mounted by environmental groups against shark fin soup, considered a delicacy by many Chinese, because fishermen often cut off the fins, then throw the sharks back into the sea alive, leaving them to die a slow and lingering death. Pol Maj Prasert Srikhunnarat said that the Thai government had recently introduced a policy to protect sharks from such treatment. As a result, Maj Prasert said, he intended to try to make an example of this case. Instead of being charged with causing hurt or harm to animals, which carries a penalty of a month in jail or a fine of 1,000 baht, Chua was charged with avoiding customs duty. If found guilty, he could face a jail sentence of up to 10 years. He could also be ordered by the court to pay a fine equivalent to four times the value of the fins. Police said that Chua told them he had sailed the boat alone from Taiwan to Thailand in order to catch sharks for their fins. He planned to take the fins back to Taiwan for sale. Chua is being held in custody at Phuket Town Police Station while investigators complete their inquiries.