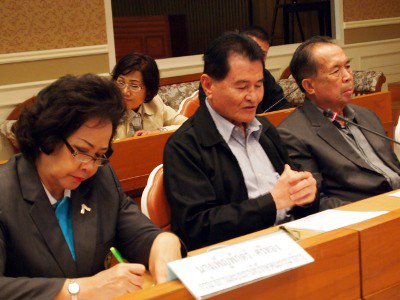 PHUKET: A delegation of senators from Bangkok yesterday were treated to a grave description of the problems plaguing Phuket’s tourism industry, including jet-ski ripoffs.

The senators, all members of the Senate Standing Committee on Tourism, agreed that everything from the intimidation and beating of tourists to the lack of a strong public transportation system were having a serious effect on Phuket’s critical tourism industry.

Phuket Senator Thanyarat Achariyachai, who chaired the meeting, said that all organizations in the province needed to cooperate to find solutions to these issues.

However, there was no mention of Patong becoming a special administrative zone or what effect that would have on Phuket’s reputation as a world-class tourism destination.

The committee did note, however, that many organizations were already at work finding their own solutions to the issues being faced.

Because of this, the committee, which included current senator and former governor Wichai Phraisa-ngop, decided that it would follow up on the progress made at a later date.