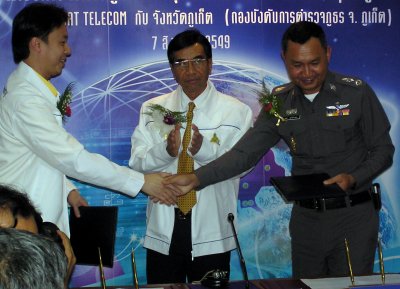 PHUKET: The provincial authorities are to install Closed Circuit TV (CCTV) monitoring systems in parts of Patong, Karon and Phuket City in an effort to boost security in popular tourist areas.

Phase I of the “Security Control and Command Center Project”, funded under the CEO Governor’s discretionary provincial development budget, will cost 16 million baht and take 180 days to complete.

Work will include installation of 48 TV cameras – 16 each in Patong, Karon and Phuket City – with command centers in the three police stations responsible for those areas: Kathu, Chalong and Phuket City, respectively.

“We have only 1,015 police officers to take care of the whole province, which is not enough to control all areas. The CCTV security system will be very useful for us, as it can be used for surveillance, traffic control and crime prevention,” he said.

CAT Telecom Chief Marketing Officer Marut Buranasetkul said the project would be the first in Thailand to use CAT Telecom’s “CAT IT Security” service, which is based on high-speed, wireless CDMA2000 1X EV-DO technology, compatible with most wireless devices.

The system will allow each command center to share security footage, which should aid cross-jurisdictional investigations and allow police to search for suspects who cross into other police precincts to evade arrest.

Work on a second phase is expected to follow.

When told about the project, a foreigner who runs a bar in Patong said, “I think it is a good thing as long as the police respect human rights when releasing footage to the media.

“I certainly hope they will target areas where touts harass tourists, and use the system to crack down on them.

“I wish the Tourism Authority of Thailand and the police understood just how much damage these touts are doing to Patong. The CCTV will let them see for themselves what these touts are like in action,” he said.