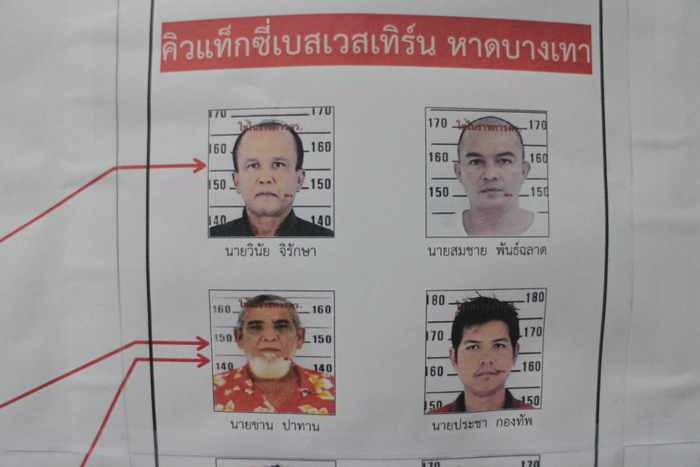 PHUKET: The first 70 of 108 Phuket taxi drivers facing charges for alleged involvement in the taxi mafia appeared in court for their preliminary hearing today. Those unable to fit in the court room were told that they would be seen by the court in early-September.

The defendants, some of whom denied the charges, were arrested during a historic, island-wide campaign to purge the island of illegal, violent and cheating tuk-tuk and taxi drivers that began on June 4 (story here).

The drivers today were charged for gathering more than five people for illegal activities carried out by criminal associations.

Prominent Phuket figures, including Tawee Thongcham, mayor of the tourist-popular Kata-Karon area, were among the 108 arrested in the sweep (story here).

“We cannot say much at the moment as our cases are being processed,” one Karon taxi driver, who declined to be named, told the Phuket Gazette today.

“We will have a lot to say when we are able to speak to the media. I will say now, however, that I denied the charges. The charges are too much for us.”

The driver confirmed that he, and some of the other drivers, have court dates set for September 1.

“Some of the other suspects and I will give further statements in September,” he said.

There were so many drivers present today that not all of them were able to fit in the court room. Those who weren’t received today will have to return at a later date, said another driver, who also declined to be named.

“I was not able to enter the court room. I have an appointment set for September 2, like many others. I will be able to give my statement to the judge then, and either deny or accept the charges against me,” he said.

“We understand why they are trying to change the taxi system. Deep down, though, we hope local people will allow us a place to earn our living.

“We all have families to feed.”