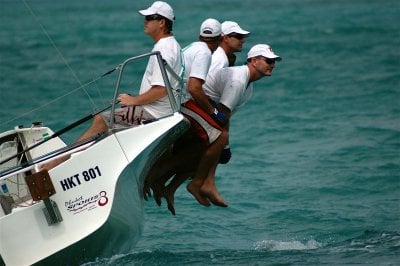 PHUKET: Driving rain and strong winds of 20 knots hammered the 31 boats competing on the final day of the third Evason Phuket Raceweek regatta today, but it was not enough to dampen the spirits of the skippers and their crews, who battled on to finish the final race in trying conditions with little visibility.

David Lindahl kept an almost perfect record on his boat La Samudra over the four days of racing to win the top honours in the top-flight IRC1 class after some close tussles with the other boats in his class.

Lindahl and crew finished first in five of the six races contested at this year’s Raceweek regatta, and in the only race they did not win, they finished second.

New Zealander John Vause, who is also based in Thailand, fought tooth and nail on his boat Ruby Tuesday and won the second race of the regatta, but finished a close second behind Lindahl in the other five races and second overall on handicap.

Keith Garry and Beaux Esprits finished third overall and third in every race except yesterday, when the difficult conditions pushed them back into fifth place.

Former world junior sailing champion Scott Duncanson was the only skipper to finish the regatta with a perfect record of six wins from six races on his boat Somtam Express, which was racing in the very competitive sportsboat class.

The IRC2 division was hotly contested, ending with the two leading boats level on points after their six races. Last year’s champion Minx, skippered by Mick Kealy, was declared winner after a count-back, scraping vixtiry over Stuart Crow and Cinders. Jim Kane finished third overall on his boat Chetak.

The fastest boats at the regatta have been the two Firefly catamarans, designed and built in Phuket. The newest, Chi Machine, was only launched a few days before the regatta started, and has made a winning debut.

Chi Machine‘s owner Marc Cudennec, the Hong Kong-based Asia-Pacific manager of Elle magazine, won four of the six races in the multihull racing class, but the real winners were a large group of children at nearby Takua Pa.

The funds raised for the sponsorship for his boat – he is aiming to raise some 2 million baht before the Phuket King’s Cup Regatta in December – are going to the Tsunami Relief Fund for the Children of Takua Pa.

Close behind Chi Machine was the other Firefly, Moto Inzi, which finished second overall after some very close racing in great conditions.

John Stall, who sails Charro, was not quick enough to catch the first two boats but finished a creditable third in every race in the multihull racing class to take third overall.