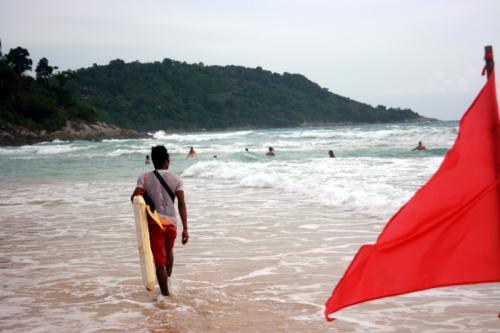 PHUKET: The Russian tourist who was comatose after being pulled from the water at Karon Beach on June 23 died on Tuesday at Vachira Phuket Hospital.

Kho Khay Gym, 31, had gone swimming with friends at Karon Beach when he was struck by big waves and dragged out to sea.

His friends called for help and he was rescued by beach vendors about five minutes later, said Karon Police Sub Lt Niphon Temsang.

He was taken to Patong Hospital and transferred to Vachira Hospital, but never regained consciousness.

“He was pronounced dead at about 7pm on July 2,” a hospital staffer told the Phuket Gazette.

Four swimmers died on Phuket beaches in the period June 20 to 23, when a “super moon” combined with the strong winds of the southwest monsoon made ocean currents especially strong (stories here and here).

Family appeals for help with missing daughter in Phuket