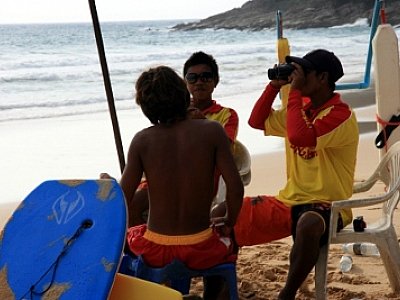 Irina Tsyz, 24, was swimming with her husband Alexander Ovsov, 25, when she started to flounder in the large waves, Tah Chat Chai police told the Phuket Gazette.

“It was windy and she succumbed to the large waves,” he said.

Fellow lifeguards on the beach saw them in trouble and rushed to the rescue.

The lifeguards reached Mr Natthakit first and pulled him ashore.

He was rushed to Thalang Hospital by Kusoldham Rescue Foundation rescue workers.

Other lifeguards raced to Mrs Tsyz, but she was already unconscious by the time they got her back to the beach.

Mrs Tsyz was rushed to Thalang Hospital by ambulance and later transferred to Phuket International Hospital in Phuket Town.

“We were notified of her death by an employee at Naithonburi Beach Resort [where the couple were staying] at 2pm,” the police said.