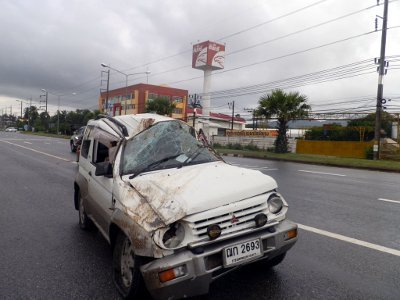 PHUKET: Officials are moving ahead with a campaign to reduce the number of deaths on Phuket’s roads to just 50 per year within the next three years.

The move is part of a nationwide campaign to reduce the road accident death toll in conjunction with the United Nations’ “Decade of Action for Road Safety”, which aims to reduce the global toll from the current 3,500 lives lost every day in traffic accidents around the globe.

Dr Weeraphan Suphanchaimat, vice president of a national committee tasked with tackling road safety issues, chaired a seminar at The Metropole hotel in Phuket Town yesterday, which was attended by more than 350 representatives of organizations assisting in the project throughout Southern Thailand.

Among the representatives, from all 14 southern provinces, were police officers, Department of Disaster Prevention and Mitigation (DDPM) officials, members of local administration organizations, provincial health officers and even representatives from the Phuket Land Transportation Office and the Royal Thai Air Force interceptor and attack Wing 7 detachment from their base in Surat Thani.

Dr Weeraphan explained to the gathering that the road-safety committee had set a target of reducing the national road death toll by 30 per cent by next year.

Despite the carnage, driving behavior was not improving, Dr Wiwat said.

“About 30 per cent of drivers involved in road accidents are drunk. Also, only about 50 per cent of people on motorbikes were wearing helmets, or a seat belt when travelling in a car,” he said.

Dr Wiwat added that the Department of Highways estimated that road accidents across Thailand in 2008 alone cost the national economy about 232 billion baht.

“The government sees that this is as a serious problem, so they have joined the United Nations’ ‘Decade of Action for Road Safety 2011-2020’ campaign. The target [of the campaign] is to decrease the number of deaths to less than 10 people per 100,000 by 2020,” he explained.

“According to the information we have, the number of the deaths in road traffic accidents per 100,000 citizens in Southern Thailand is considered relatively high when compared with other parts of the country.

“However, Phuket is one of the top three provinces in the country for having the most motorbike riders wearing helmets. We have found that this has helped to reduce the number of deaths in traffic accidents in Phuket by 40 per cent, when compared with [the number of deaths] just five years ago.

“Hopefully, in the next three years the number of the deaths on Phuket’s roads will be less than 50 people per year,” said Dr Wiwat.

As part of the campaign, the Phuket Highways Office is spending 84 million baht on making 40 road accident “black spots” across the island safer.

“The Highways Office has already spent 40mn baht on the project, and work has already begun on 20 black spots, including the curve at Baan Kor En in Mai Khao,” Dr Wiwat said.

“In the past, there were a lot of road accidents on that curve, but recently there have been almost none,” he added.

“I don’t know how I came through in the end…”