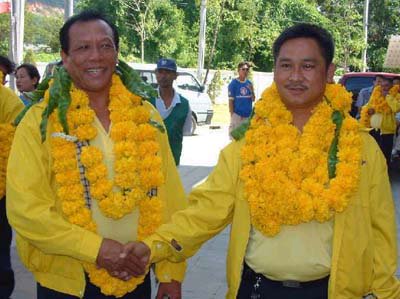 PATONG: On the first day of applications for the Patong municipal elections, Mayoral candidate Pian Keesin of the newly-formed Rak Patong Team registered his candidacy with 18 other members seeking town council seats under the Rak Patong banner. Running against him will be Songserm Kebsup, older brother of Phuket Democrat party MP Chalermlak Kebsup, who registered his application along with 18 fellow members of the Patong Progess Team. The Phuket Election Commission (PEC) has set February 8 as election day and intends to strictly monitor the campaign and balloting. Patong’s last government, composed entirely of Patong Progress Team members and headed by Chalermsak Maneesri, was dismissed after two Provincial Court judges ruled that allegations of cheating in Patong Municipality elections in November last year were proven. Phunsak Naksena, Chief Administrative Assistant of Patong Municipality and Election Director, explained that Patong is divided into three electoral districts. Registered citizens cast two votes, one for mayor and the other for a town council member from their district. Direct election of the mayor became mandatory after the city was upgraded to tessaban muang status. Since that time, however, both elected mayors were thrown out of office: Surasak Maneesri was stood down by former Interior Minister Purachai Piemsomboon on October 2, 2002 and his brother Chalermsak, who won the following election, was ordered out – along with 17 team members – last November after judges ruled that the team imported voters from outside the district to take part in the election.