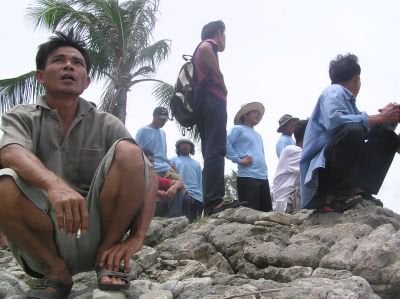 PATONG: A man disappeared beneath large waves while swimming in front of the Amari Coral Beach Resort yesterday afternoon. Rescue efforts have failed to find him, and he is believed to have drowned. Worawut Pholboon, 27, from Srisaket, was swimming with three co-workers from the Patong Resort when he was pushed underwater by a large wave. Wimonrat Trangsurat, who was swimming with K. Worawut, said, “There were big waves and it was windy. He was pushed underwater by a large wave at about 5 pm.” The friends immediately started searching for K. Worawut in the strong surf, but were soon forced to give up when two of them developed cramp. Three foreigners joined the search The police were alerted at about 5.10 pm but were unable to help because they had no boat available. Phuket Marine Police officers arrived at about 11:30 this morning and began a two-hour search, but failed to find K. Worawut’s body. K. Worawut’s cousin, Boonchai Boonwan, told the Gazette, “I came to the beach at about 8 pm – as soon as I heard what had happened – and I waited all night for his body to wash ashore.” K. Worawut’s friends joined K. Boonchai in his vigil, and this morning lit joss sticks and prayed while they waited. The group will continue their vigil in the hope that K. Worawut’s body is recovered so that it may be cremated according to Buddhist rites. K. Worawut was in good health, his friends said. There were no beach guards where he and his friends were swimming, nor were there red flags indicating that the surf was dangerous to swim in.