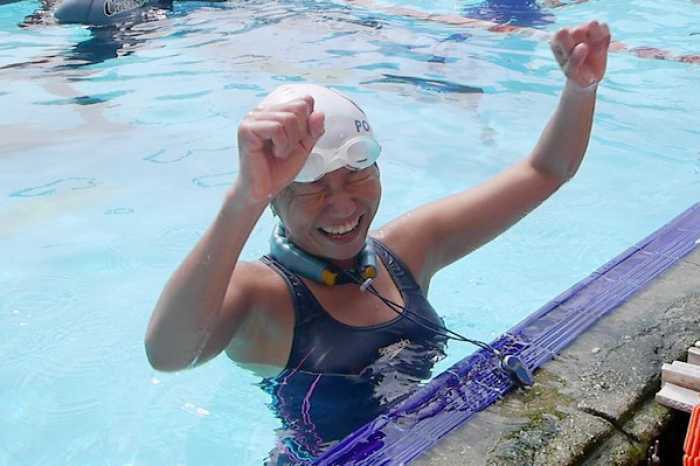 PHUKET: A number of national records were brushed away as the We Free Dive Suunto Series drew to a close on December 21.

All eyes were on American Katie Wierenga, who is ranked third among the USA female Dynamic No Fins (DNF) athletes after an outstanding performance in October. Having surpassed the USA DNF record in practice, Wierenga pushed hard to make the record official.

“Katie just missed a US record in DNF. She made the distance, but wasn’t conscious enough to get a white card,” Association Internationale pour le Developpement de l’Apne (AIDA) judge Richard Wonka told the Phuket Gazette.

“Katie essentially got her red card for nerves. She was going for a new national record – a distance she had swum before in training.”

Wierenga surpassed the American record of 120m with a big push to 130m. However, the judges were forced to hand her a red card.

“In competition, the mind plays a big role, and attempting a national record can easily induce some jitters, so she came up after 130m with signs of a very small blackout.”

“Nora Lestari impressed us with three super clean national records,” Wonka said. “We had met her before at the One Breath Jamboree in Bali. This was her first ever pool competition.”

Lestari took an easy Indonesian title for the static apnea (STA) event with at time of 3:13. She then cruised through the dynamic with fin competition (DYN) as she covered 65m while submerged. Finally, she took the Indonesian DNF with a clean back and forth in the pool for a 50m swim.

Another national record smashed during the event was by Azam Hamid, who beat his previous Malaysian STA record with a 5:08min breath hold. In a previous WeFree Dive Suunto Series event, Hamid had made a similar strategic error to Wierenga when he pushed beyond the national record during a DNF attempt and received a red card for a blackout.

Topping the score cards in all three events with clean dives was Swiss diver Gregoire Folly.

“Our old friend from Switzerland showed up unexpectedly, signed up the evening before and showed everyone how it’s done, winning the competition with a solid lead,” Wonka said.

Despite going head-to-head with American Walter Johnson to win the entire series and a white Suunto Di6 dive computer, Melanie Long from the UK had an exceptional showing. She was able to set a personal best in competition with an 85m DYN swim.

Johnson, on the other hand, took it easy. With a single white card advantage, he stayed focused and put up reasonable scores while staying within his safety zone.

“One non-white would have cost him the D6i. So his extensive training in competition diving, which he rigorously does in every training session has paid off – big time,” Mr Wonka said.

“All of this would not have been possible without our sponsors Dive Supply and Suunto, who were outstanding.”

Private jets can set down, but not stay at Phuket Airport for New Year, say officials